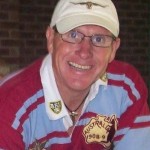 Frank has been with Orange Runners Club for the past four and a half
years and was elected as President of the Club at the AGM held in April
this year.

Frank thinks that ORC has a lot going for it as a club. He wants to
focus on family orientation and supporting the kids while he is
president. Frank is a hands on person and open to all feedback from
members. “If you have a problem or need to know something just come up
and talk to me” is Frank’s attitude. He wants the Club decisions to
be made by members and one of his initiatives is more regular meetings
where he will invite all club members to attend and vote on any
decisions to be made.

Frank would also like the club as a whole to support an event like
Mudgee as it caters for all levels, young and old alike and in turn
builds club comradeship.