On a weekend of two extremes the warmth of Saturday was replaced with a cool almost cold Sunday morning as runners were greeted with a strong headwind on the climb back up the hill to the finish line. A small group of dedicated members tackled the conditions with the Prestwidge family dominating the short course, with dad Glenn (16:07) beating the young Ross brothers, Lachlan and Cameron over the 3km journey, while Glenn’s daughter Caitlin (16:36), was first back up the hill in the girls race. Jennifer McLean came in second while Denise Quinlan was third home. In the 5km Jack Daintith showed a clean pair of heels to the field running 20:28 on his way securing the overall win on the day. A charge of veteran runners club members were in the chasing pack, with Jim Rich and Michael Sharp running the next best times. Of the ladies, consistent winner Amber Rich (22:20) again took the first spot ahead of Alicia Ross and Kate Thornton. Erin Gibson and John Betts made up their own 7.5km distance which they completed in a leisurely 52:23. Doing the tough 10km with a couple of extra little rises, Iain McLean ran a very solid 43:37 to finish clear of Paul Centofanti and Anthony Daintith. Of the ladies, Kinisha Roweth and Ursula Wilson (51:49) powered up and down the hills to finish together, while Kim Jarvis was as consistent as ever finishing third. Special mention to Patrick Hakkinen who picked one of the toughest runs to do his first longer run with the club, completing the 10km run in the handy time of 55:32.

Wednesday night at Elephant Park saw another batch of runners smashing out Personal Bests on a warm evening with over 70 runners hitting the track. Those runners getting PB’s were David Ross 34s, Alicia Ross 16s, Nathan Garton 8s, Sophie Hogben 2m49s, Martin Ryan 1m18s, Kate Kramer 1m16s, Reilly Wilson 2m15s, Kerrie Layard 2m45s and Jennifer McLean 28s. Fastest runner on the night was David Ross, with his PB giving him a slick 11:03. The relatively flat Elephant Park must be a breeze for David after all those hilly trail runs like last weekend’s Narrowneck Night Run at Katoomba. While keeping things in the family, David’s wife Alicia was the fastest female with her own PB inspired 13:42. Monique Connolly was the overall winner on the night with a very even paced 17:06.

It’s not too late to get your names and money in for next Saturday (November 29) Christmas Party / awards night at Nashdale Community Hall from 3pm to 8pm. Cost is $10 Family and $5 for individuals. Please see / contact Jane, Bill or Graham this weekend.

The 2015 Running Festival Committee are looking for people to assist with some of the minor roles. Please contact either one of the Festival or Runners Club Committee members for more information or visit the web site www.orangecolourcityrunningfestival.com.au

This Sunday will see the club run at CSU campus. It is recommended that you enter the grounds via the second gate and look for car park area 9. 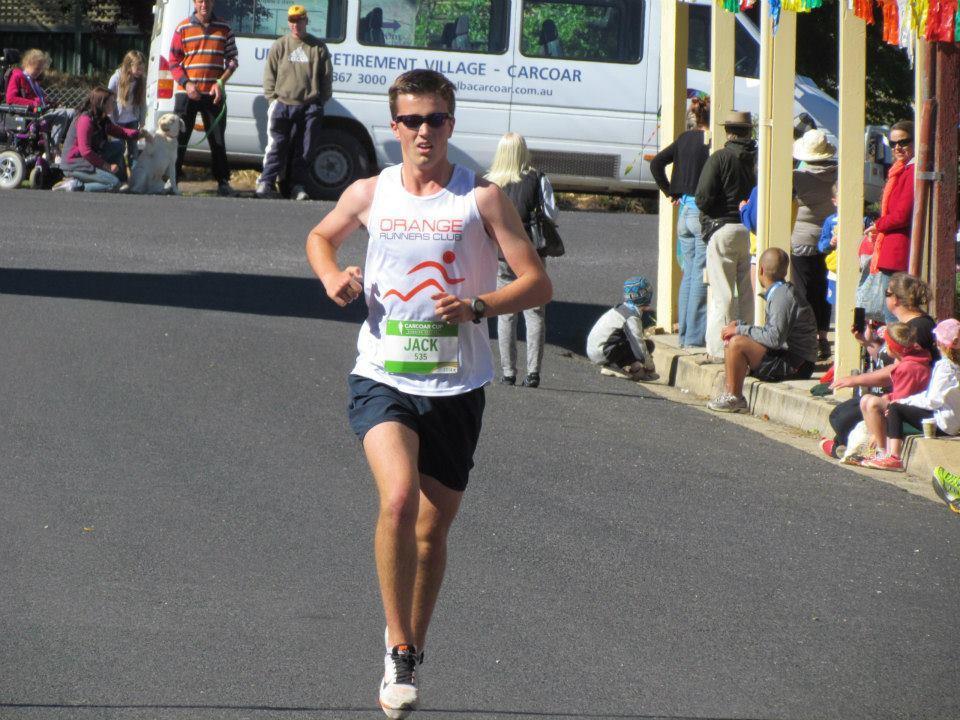 JUMPING JACK: Jack Daintith, showing good form at the Carcoar Cup, was the first home in Sunday’s 5km run at Bulgas Rd and was also the overall winner on the day.