Auberson’s stroll in the park

Festival early birds out to play

The time has arrived to get your early bird entries in for next month’s Orange Colour City Running Festival. This week sees only one month to go before the Orange Colour City Running Festival and Wednesday 24th January will be the close of early bird entries. As the saying goes, it is the early bird that catches the worm and in this case some wonderful prizes can be won – an Electrolux Fridge worth $1900 and a gym membership just to name two.  So check out the website www.orangecolorcityrunningfestival.com.au for details or call into the Dept. of Sport and Recreation on the corner of McNamara and Byng Streets. Remember your New Year resolutions – entering the Running Festival will certainly get you on your way!

On Sunday around 60 runners battled the heat, a tricky wind and the course at Bargwanna Road, whilst attempting to guess the time they would run their distance without the aid of a watch. Defying belief young gun Brandon Connolly was only 7 seconds away from his predicted time and the fastest 5k of the morning in a time of 21 minutes & 53 seconds. Eight people were within a minute of their estimated time, while a few starters appeared to have a change of heart halfway through their run as their time was a little too far out – or perhaps their legs were not as fast as they thought.

Some 69 runners took to the start line of the Elephant Park 3km handicap run on Wednesday afternoon. Prime TV was in attendance to get the latest update and to see how everyone’s preparation was going for the Running Festival. Setting a blistering pace out front was Laura Auberson finishing in a time of 10.47 (equal PB) and also Wednesday’s overall handicap winner. PB’s went to Millie Lenehan (14.27), Mitchell Essex (11.08) and Bec Halls (16.29). There was also a special presentation to a number of motivated club members. Daryl Roweth and Logan Whitely both received their 200 run certificate. Liz Simpson was presented her 100 run certificate.

For those that don’t already have one, please see Frank ASAP to buy a timing chip ($6 each). The electronic timing system is in full operation – no chip, no time.

This Sunday’s run will be at Lake Canobolas (9:00 am), where there will be several distances on offer. Hopefully, all the competitors will be able to follow the directions and course on the tracks around the lake, especially Jack. Perhaps a dip in the lake may be on the cards afterwards to cool down. 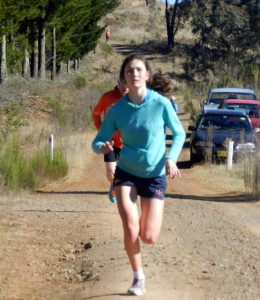