The first Sunday of 2014 and over 60 runners and walkers gathered at the site of Gosling Creek for their regular morning outing. With a choice of 1 or 2 circuits of the 2.3km Gosling Creek path, or the long run (9.6km) which includes 1 lap around Gosling plus a run out and back on Bargwanna Road and then a reverse lap of Gosling Creek to finish. Speeding around the 1 lap journey, John Connolly was the quickest with 11:51, while Mr Consistency, Bill Fairgrieve finished second just ahead of Gary Penrose. Kerrie Lindsay (12:06) lead the female charge with the first 5 ladies finishing within 30 odd seconds. Meagan Coulson-Knight was the next quickest with Jessie Dean running in for third.

Doing the 4.6km run Connor Whiteley was sensational getting through in 18:22.Charlie Coulson-Knight and John Bowmer were the next best men in a tightly contested group behind Whiteley.  Amber Rich (20:42) was also clearly the fastest of the ladies to beat home Alicia Ross and Lily Craig.

Doing the longer 9.6km run tested the fitness with Iain McLean finishing with the fastest registered time 40:30 with Mark Chapman cruising into second and Jim Rich beating birthday boy Wayne Stewart into third spot. It was great to see Penny Chandler (48:51) out on the track again as she ran the long course and finished first female. Kinisha Roweth was second home and consistent performer Amanda Gregor third. The overall winner on the day was young Harry Dean who completed the 1 lap course in 19:20.

Some announcements that were missed from the last run of 2013, was that the great Jim Rich recorded his 700th run and was awarded with a certificate celebrating the fact. That’s a super effort and he is still running fast (see results above). Also recognised for 300 runs was young Karen Neal. Well done to you both.

Wednesday nights run at Elephant Park saw a crowd of around 70 tackle the 3 laps with James Locke declared the overall winner after recording an impressive 46s personal best time of 12:35. Ursula Wilson returned after 2 weeks off and surprised herself with a 6s improvement from her best time. Connor Whiteley recorded the fastest time of the night with 11:05.

Early bird entries close on the 21st so to be in the running for a prize get your entries in. There are 4 early bird prizes and first prize is an Electrolux fridge valued at $1900. All you have to do is enter in – John Parson Hotels Brokers Marathon,  Athlete’s Foot Half Marathon, Bupa 10km, Hotel Canobolas 5km, Pete’s Car Wash 2km and we shall see you at the start line.

ORC Members get your prize donations to Lynda Chapman ASAP and get your name on the list for volunteers (sample bags collation, bibs, t-shirts, site/course setup and packup), a little time from a lot of people goes a long way and will assist us in helping our local charities.

A big thankyou to Julie and Mark Chapman for collecting the timing mats each Sunday in December. Jim Rich is going to be looking after that role in January and Brian Sharp will cover February, but we need volunteers for the rest of the year, so please see Jane Fairgrieve. Also the club is looking for volunteers to learn the timing system – again if any interested parties see Jane so she can organise the training. This Sunday runners will be out at Bulgas Road 3km, 5km and 10km distances. 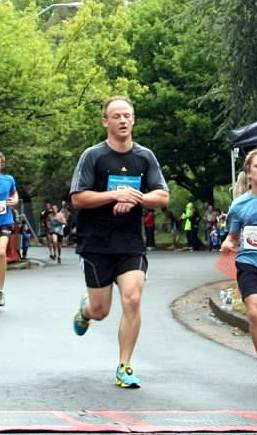 ON TIME: Iain McLean finished the longer 9.6 kilometre run with the fastest registered time of 40 minutes and 30 seconds.