There were few dedicated to tackle the challenge of Kinross Forest on Sunday –yet another hilly run. It must have been the impending silly season, or just sheer determination, but many members took the opportunity to take on the gruelling 9km course. Greg Delaney (who may need to go shopping as his clothes appear to be falling off him) again set himself a hard challenge and completed the 9km, as did the speedy duo of Mitch and Nicole Willamson fresh off their achievements in the 8 Day Games.

Anthony Danith was the winner on Sunday, demonstrating that the Danith clan’s training regime is certainly working.

Raising the bar even higher on Sunday were the ORC members who competed in the Canberra Half Ironman. If a 1.9km swim, 90km bike ride and 21.1 km run sounds like your dream Sunday morning then you should put this one in your diary! Leading the ORC team members was Laura Wolfson. Laura’s improvement this year has been nothing short of motivating, from completing her first half marathon in Mudgee in August to completing and winning her age group in her first Half Ironman in a fantastic time of 5.7.34. Winning her age group has ensured Laura a place in the starting line of the world championships in the US in 2012 , and it would be great to see her get to this awesome event. One of the quieter ORC members, Laura always has a smile on her face despite the rigorous training regime she has undertaken with the Ostini training group this year. Congratulations Laura.

Speaking of Ostinis, hot on Laura’s heels was her training mentor President Frank (looking resplendent in a pink and black tri suit), Mark Delaney and Tony and Danielle Syme. To see these athletes cross the line after such a gruelling event and in the horrendous weather was inspirational. All are commended on their massive achievement and the wonderful way in which they represented ORC.

As we approach our last Sunday run for the year a sincere thank you must go out to a few members of ORC whose dedication, commitment and donation of precious time has again seen a successful year. Thank you to President Frank and his band of brothers Stu Vidler, Brian Sharp and Mike Cooper who have done a fantastic job in managing the club. Frank has been a fearless leader and we all love him for his constant encouragement and positive attitude.

A special mention must go to Michael ‘the Sorcerer’ Sharpe, who uses his magic to ensure rain or shine, we are all able to have a run each week. In the absence of Robyn Cotton, Michael has once again been the chief time recorder and the keeper of the ‘magical bag.’ The Sorcerer is also the club’s results man and handicapper and has used his powers for good over the years to create a secret ‘tablet’ which holds all members results, times and stats, to which only a select few are granted the key. This year Joel Kitto demonstrated the necessary skill and dedication to be presented with the key to the tablet, being anointed the Sorcerer’s Apprentice. Using the all powerful tablet, the two embarked on a mission to work out handicap winners, fighting their way through runners scrawl on timesheets to upload results and PBs with speed unknown to mere mortals. The Sorcerer and his Apprentices’ commitment in performing their magic week in week out been greatly appreciated. From all members, a sincere thank you.

This Sunday’s run is at the Botanic Gardens with a 9am start.

For those that haven’t already, check out the ORC website for details on the ORC Orange Running Festival to be held on Sunday 4 March 2012. Entries are now open. 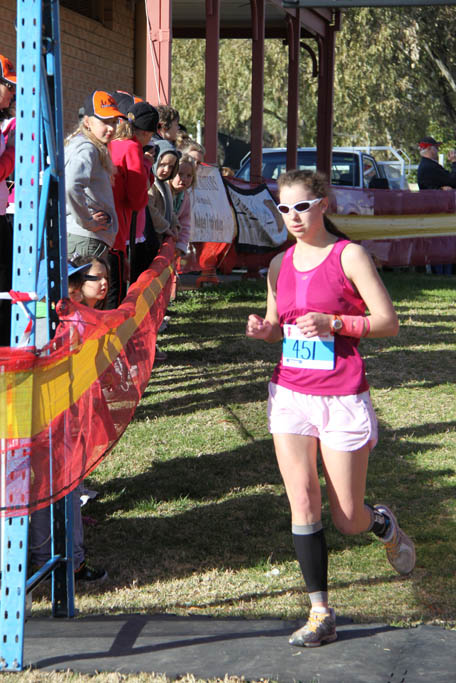 IMPROVEMENT: Laura Wolfson has quallified for the world championships in the United States.