A lovely winters morning in Orange on Sunday saw a good roll up at Elephant Park for the Endeavour Park run, despite large numbers venturing to Sydney for the City 2 Surf. With around 75 starters and despite a staggered start, the footpath along the side of the rugby field was covered with runners as they charged out for the first lap around the walking track. Of those doing 1 lap, the younger guys dominated the top placings with Jack Daintith (9:53) finishing ahead of Noah Lamrock and Thomas Lloyd. The experience of Louise Lloyd (12.34), Kerrie Lindsay and Carol Donlan led them to the front of the ladies over the 2.6km lap.

In the 5.2km run, the second placed Jackson Boucher, was all that stood in the way of a Bangert Family Trifecta. Ricky Bangert was first across the line in 22:59, with Boucher 14s behind. Fred Bangert was not far behind in third, just ahead of Elliot Bangert. A close tussle in the ladies saw the strong running Nicole Williamson (21:54) hold off the fast finishing Leanne Corcoran by around 10s, while Katherine Lindsay ran well for third spot. Doing the 7.8km (3 laps), Nathan Sutherland was the fastest with a quick 30:13, to finish ahead of Mark Chapman and a strong running Dan Benton. In a very close women’s race Jessica Richards (33:25) finished in front of Amber Rich and Ursula Wilson came in third. Kay Davis was the overall winner on the day with a 31:22 run for the 2 laps.

In the City 2 Surf a large contingent headed down to tackle heartbreak hill with a few other people and unfortunately I don’t have all the names and results so I will mention a couple of the really quick ones and after doing my first C2S last year I say to those who did it, well done it is a great achievement to complete and a great experience to have had. Connor Whiteley was the standout from Orange Runners Club with a super time of 51:30. Unbelievably over 99% of the field was behind Connor and even more unbelievable he had 4 guys in front of him in his 13-16 age group. Brandon Connolly was next best for us with a 54:06. Of the Orange ladies who ran Estelle Dean ran a super 61:36 to outdo sister in law Sue Dean who ran a 63:30. Of the many great results Brian Sharp came 3rd in his 70 – 79 age category with a fantastic 70:46.

On Wednesday night around 80 runners enjoyed the run around Elephant Park with Mitch Williamson slipping around in an even 9:28 to be easily the quickest. One of the impressive things besides a number of personal bests was that the majority of the field ran / walked all of the 3 laps and finished in 25minutes or less.

Mudgee Running Festival (24th Aug), Dubbo Stampede (7th Sept) and Edgell Jog (7th Sept) as well as Forbes in (12th) October, so if your looking for a local event to do, one of these might suit you.

This weekend the club run is at Clergate and usually includes 3km, 5km & 10km distances. 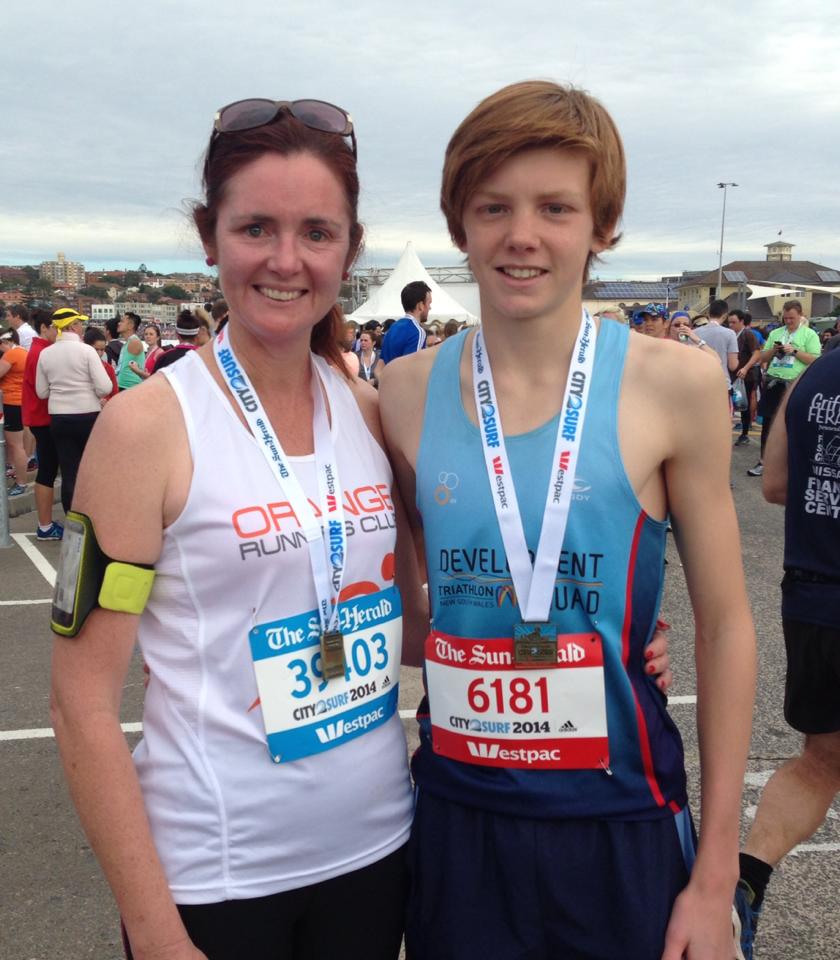 GREAT RUN: Mother and son, Michelle and Connor Whiteley, still had enough energy to smile for a photo after finishing Sunday’s City2Surf.