Sunday was ‘no watch’ day at Bargwanna Road where members predicted in what time they will complete the 3, 5 and 10km courses. I’m sure the timekeepers were watching closely to ensure that watches, ipods and iphones were not being used to assist runners run close to their predicted time.

One man who didn’t require any assistance was Tony Fitzpatrick, who guessed the closest time, being only 5 seconds out for his prediction for 10km.

It was good to see Alastair Merrifield back running on Sunday after his long recovery from an Achilles injury. Great timing Alastair with the Running Festival fast approaching.

Wednesday’s run was again held in what has been consistently been rainy conditions on Wednesdays. The beautiful bronzed bodied visiting triathletes were nowhere to be seen this week so there were less congestion and ORC members able to claim line honours.

The winner at Wednesday’s run was Danielle Williams, a newer member of the ORC who is quietly doing fantastic running. Danielle completed the 3km in the rain in 12.16. Well done Danielle.

PBs were recorded on Wednesday by other newish members Chris Hanicar and Jackson Boucher, both achieving 21 second PBs.

Still missing in action on Wednesday was Tom Gleeson, the ORC speedy stalwart and general all round good guy. Rumours abound that he has been busy house painting, and has in fact been spotted out and about in what appears to be painting gear however he has not been sighted at an ORC run this year as yet. Looks like the most consistent runner award may be up for grabs in 2012! Look forward to seeing you soon Tom, no doubt when you put down that paintbrush you will have lost none of that pace.

The ORC Running Festival to be held Sunday 4 March 2012 at Bloomfield is now only 5 weeks away. Anyone keen to join in this event for 2012 should now be registered, upping the training and generally getting pumped about this great local event. Walkers, families, weekend warrior joggers and serious runners are all encouraged to attend. If you are still in holiday mode and lacking some motivation, not yet registered or just want further information on the details of the various events, head to the website at www.orangerunners.com.au. It is going to be a fantastic day with the biggest barrel draw on the running calendar. Remember early bird entries close 12 February so don’t wait! All runners entered prior to this date will go in the draw to win a Westinghouse refrigerator kindly donated by Electrolux Orange.

Monies raised from this year’s Festival will be donated by the ORC to Cerebral Palsy Orange Branch who provide services for over 80 clients in the Orange district. If you were looking for another reason to get the sneakers out and enter, this is a great one.

Fearless leader Frank is leading a group out on the Running Festival half marathon course on Saturday 4 February – all keen 21.1km’ers (and anyone else keen for a jog or walk) meet at the start of the half marathon course (the Leisure Centre at Bloomfield Hospital) at 6.20am. The real motivator for joining this run is of course the coffee and fruit scones afterwards – as Karen Neal will attest to.

Late news as we went to press was that the Ostini boys Kyle and Bryce were awarded joint Young Achievers of 2011 at the Orange Australia Day awards. Kyle and Bryce were recognised for their fantastic fundraising efforts for the Cancer Council. Congratulations boys, a wonderful well-deserved achievement. You make the ORC very proud.

Tomorrow’s run is at Lake Canobolas, with a 3 or 6km. 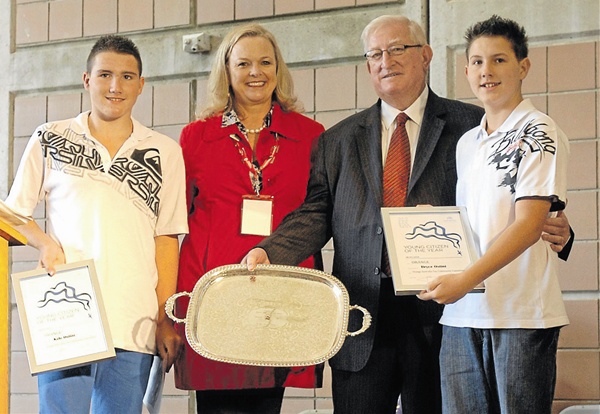 BROTHERS IN ARMS: Orange brothers Kyle and Bryce Ostini were awarded young citizen of the year during yesterday’s Australia Day awards, they are with with Australia Day ambassador Lyndey Milan and Orange mayor John Davis.