A big weekend for runners club members last weekend with some venturing to Parkes for the North Parkes Fun Run, a few went to the Sydney Morning Herald Half Marathon, a few more doing the North Face 100km, someone went to Geelong for the Great Ocean Road 14km race and then there was still a good turn out at the local club run at Clergate.

As well on Saturday a few of our members took advantage of the Athletes NSW Coaching Clinic held at Elephant Park. Members were put through their paces by Olympians Lisa Corrigan and Youcef Abdi and they advised it was beneficial and well worth doing.  It certainly was for Connor Whiteley as he put the training into place the next day at the Northparkes Rotary Fun Run and completed the 5km distance in a time of 17:59 to be a clear winner. Some of our members were fortunate enough to have their coaching clinic fee reimbursed to them thanks to the generosity of Michael Sharp and Sports and Recreation Orange, situated in McNamara Street. Sponsorship is always of great benefit to any club and this time we thank Sports and Recreation Orange for enabling our members to enjoy this additional training. Doing the 2km race at Parkes Logan Whiteley (8:14) chased the winner all the way and finished a gallant second overall. Sisters, Abby and Molly Dean powered along and finished with the identical time of 9:09 to finish equal fourth out of the girls. Harry Dean (10:54) was all smiles as he cruised into the finish. Also putting a huge effort into the 2km run was Keagan Wilson (21:07) who was very proud of his medal. In the 5km Orange Runners secured a 1-2 finish with Jack Daintith (19:11) securing second spot just behind Connor. Estelle Dean (20:37) and Nicole Williamson (21:06) finished second and third respectively in the ladies 5km with great runs. Both Hugh Daintith and Jessie Dean picked up podium finishes in the under 16 category.

In the Sydney Half Marathon Donna Read ran 1hour54minute20seconds to be our fastest representative while Renai McArdle (2:19:29) and Sabrina Manickam (2:24:45). Also doing a team half marathon were Wayne and Naomi Sunderland (2:13:57).

Susie Patey travelled to the Great Ocean Road event and competed in the Geelong Advertiser 14km race finishing in 1hour49minute4seconds.

David Ross also completed the gruelling North Face 100(km) in the Blue Mountains in a fantastic time of 12hours41minutes. Unfortunately Brett Sammut had to pull out after completing some 46 odd kilometers.

On Wednesday night over 100 runners were out on the track and putting in chasing that personal best time.

All runners club members would like to wish Brad Simmons and Ian Fischer good luck as they venture to South Africa to tackle the 87km Comrades race from Durban to Pietermaritzburg (known as the up year). I am sure they will enjoy it and come back with wonderful memories.

This weeks Sunday Club run is at Bargwanna Road. 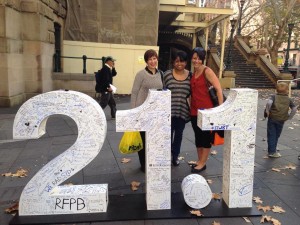