A very successful Orange Colour City Running Festival has been held with around 2000 competitors enjoying our various distance events, volunteers working hard to assist with the running and a few local charities to benefit financially from the event. Well done to all involved.

Would like to mention all competitors that took part in all races from our club, but time and space restricts this, but in the half marathon our Sue Betts climbed up off the canvas a number of times, especially towards the end of her training, to get out there and complete the half marathon in a great sign of what runners club is all about. Well done Sue.

Last Sunday’s results for members in the John Parsons Hotel Brokers marathon, saw Brad Simmons as the fastest finishing in ninth place overall and third in his age category with a super time of 3:15.51. Ursula Wilson also had a strong finish being the fourth female home and second in her age category with an outstanding 3:41.45.  Many runners struggled with the heat and headwind. In the Athletes Foot Half marathon Jared Sullivan (1h26.40) was the quickest of our members competing, finishing ninth overall and third in his age category. Leanne Corcoran (1h36.59) ran a gutsy race finishing as our fastest lady (seventh overall) and fourth in her age group. Veteran Brian Sharp was first in his age group as this young at heart athlete ran the 21.1km distance in 1h53.36.

With many club members starting in the BUPA 10km race we picked up a few top placings. Meg and Adam Reeves were our two fastest runners with Meg finishing as fifth female and third in her category as she clocked 43:10, while Adam ran 44:12 to be fifth in his category. Other members to do well were Basil Baldwin (first in Category), Niomi Boynton, Tina Kiho and Mark Delaney second in category and Mark Chapman and Donna Read third in category.

In the Pete’s car Wash 2km held at Gosling Creek on the Saturday, the race was won by Ricky Bangert (8:11) from Logan Whiteley (8:23) and Harry West (8:32). While of the girls Zoe Peters (8:37) was the quickest from Xanthe Keegan (8:42) and Jessie Dean (8:47). Some of the local members who were age category winners in the 2km were: Abigail Francis, Keagan Wilson, Sophie Martin, Arthur Locke, Gracie Peterson and Ava Rogers. Other placegetters were Lachlan Ross, Grace Srzich, Eva Keegan, Oscar Chandler Sullivan and Lily Bangert.

I apologise for any members I have left off who achieved a great time or place on the weekend.

On Wednesday almost 120 runners, some possibly inspired by the weekends running were out giving their best over the 3 lap Elephant Park track, with some even outdoing their previous Personal Bests. Those runners to record PB’s wereJackson Essex 5s, Lucas Vickery 6m28s, Stuart McGarva 2s, Marc Kiho 3s, Kate Hook 1m8s, Emma Hook 32s, Maddi Hook 12s, Victoria Morgan 19s, Wendy Dibble 15s and Jennifer Caine 27s. Kate Hook’s PB inspired time of 15:12 saw Kate declared the winner on the night, with three very consistent laps. Jack Daintith recorded the fastest time with a solid 10:38 while Meg Reeves was not far away with a 10:46 as the quickest female and sandwiched in between these two was Running Festival Registrations king Iain McLean.

This Sundays run is at Elephant Park / doing the Endeavour Oval loop. 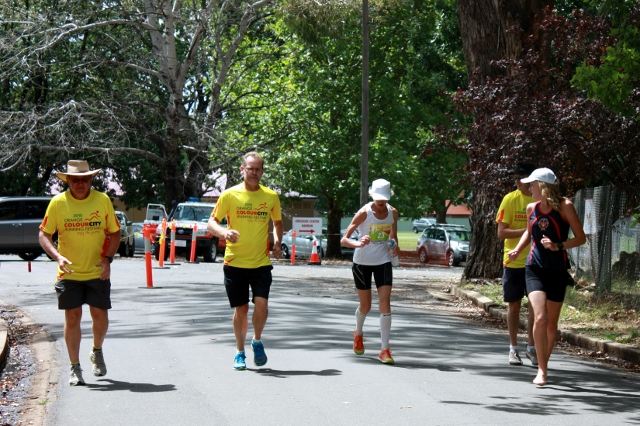