A beautiful Sunday morning saw 74 starters out at the Clergate school run. Liz Simpson belted out a super quick 3k (11:43) to finish ahead of top performing juniors Ella Lamrock and Lily Craig. Liam Coulson-Knight led the boys home with ‘Kiwi’ Alistair Merrifield and Craig Jones not far behind.

Running the 5k young Mitchell Cooper shot out of the blocks and led a competitive field home where the first 8 runners finished within 3 minutes of each other. Matt Lobsey and Luke Thorley were second and third respectively. Of the ladies Amber Rich (21:31), finished clear of Suzanne Coulson-Knight and triathlon star Stephanie Harrison, who both finished with the same time.

In the 10k Leanne Corcoran backed up her outstanding Blackmores half marathon result of 1hr 37m (7min PB), a little Hero Dash on Saturday and still managed to keep the fast moving Sue Dean at bay, running a solid 45:19. Rhianna Fitzpatrick also put in a strong performance to finish just behind in third place. Mark Chapman again powered away from the field to record a time of 43:46, with Daryl Roweth and Joel Kitto picking up the minor placings.

A few questions remain unanswered from Sunday’s run, ‘how many K’s did Tony Fitzpatrick run’? and as Gary Taylor said ‘where did he go’? Overall winner was Bulldogs supporter James Dean, who ran with son Jack over the 3k course, but is planning to step up to tackle the half marathon, at the Colour City Running Festival in February. On that note entries for the Orange Colour City Running Festival are now open, you just go to the website for details www.orangecolourcityrunningfestival.com.au “We’re keen are you?”

On Wednesday Night at EP another small crowd of around 60 runners took to the track in cooler temperatures with surprise, surprise, Mitch Williamson the fastest just ahead of Anthony Ellison. No PB’s have been advised to us but Brad Simmons did get recognised for 300 club runs. Winner on the night was Cleopatra Nam.

The club is looking for volunteers to assist by collecting the timing mats from the shed each Sunday and taking them to the Sunday run and then returning them back to the shed. It will be on a rostered basis (1 month each volunteer) and the mats will fit into a small sedan boot. Please see any committee member to put your name down if you can help out.

An upcoming event is the Forbes Charity Fun Run, next Sunday 13th October, which is an event that is usually well supported by the ORC members and this year they have modified the distances to include both a 5k and 10k run, as well as a 2k walk / jog. You can enter on line or at Forbes on the day (between 7am & 8.30am), but with an expected increase in numbers it may be advisable to enter early. Also if you enter by 8/10/2013 you will be able to do so at the early bird rate. Runs start at 9am (2k at 9.15am) (www.forbescharityfunrun.com)

This Sunday will see a return to the Gosling Creek run with 2.3k, 4.6k & 9.6k distances available. 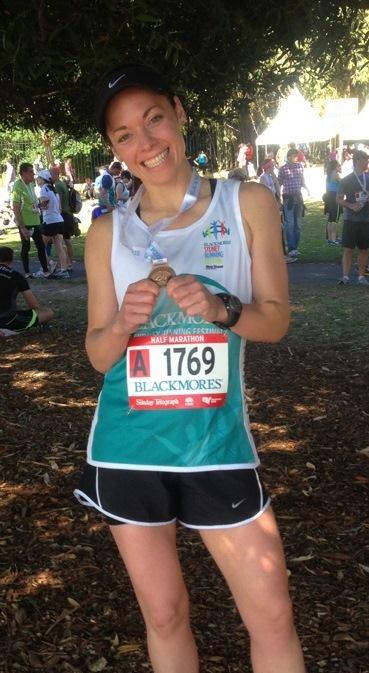 Leanne Corcoran continued her good form into Sunday’s run after a strong showing at the Blackmores Half Marathon in Sydney.