Despite a few events being on, like Relay for Life and Orange Triathlon Club racing on Sunday, the Runners Club Sunday run was well attended by 70+ members. With distances from 1 lap / 1.6km to 5 lap / 8km all levels of fitness were catered for.  Stephen Blackwood was congratulated for doing his 100th run with a certificate, while Brett Sammut showed his great fitness levels after doing his Indoor Ironman (over 12 hours of swimming, cycling and running), to back up and run a few laps. Denise Quinlan, Rosie Corcoran and Samantha Fahy were the placegetters over the 1 lap course.

In the 3.2km run Liz Simpson (13:21), was a clear winner from Kerrie Lindsay and Emily Pell, while in the male 3.2km Jack Daintith (12.02) finished ahead of Leon Lincoln and ‘father time’ Michael Sharp. The 4.8km run saw a Craig family double, with young Lily (23:24) leading the girls and Dad / David (24:30) home. Erin Gibson and Julie Chapman were 2nd and 3rd in the ladies while Nathan Garton and Hugh Corcoran finished not too far behind David. Doctor Gareth Thomas (32:09) proved just fast enough to push John Bowmer back to second place in the 6.4km / 4 laps, with Gregor Ham running into third. Ati Sadr (43:54) was the quickest lady over 4 laps, with Fiona Macklin second.

The longest run, over 8km saw the most competitors, with many fine performances noted. Amber Rich led out the ladies with a strong 35:46, to finish ahead of the super fit Leanne Corcoran and the very consistent Kim Jarvis. Brad Simmons (33:51) was the winner in the men’s finishing just in front of Mark Chapman and Mike Cooper. Rebecca Lincoln (48:48) had a great run in the 8k race to pick up the overall win for the day

On Wednesday night almost 120 runners and walkers converged on Elephant Park with a great temperature, made for an enjoyable run. With around 70 runners between 12minutes and 20minutes for the 3 laps we are showing a fantastic fitness level in our club. Mark Chapman was the fastest on the night with a time of 11:20 but with 8 personal bests (PB) behind him, he will be looking over his shoulder soon for the competition. Leon Lincoln kept the achievements in the family by not only setting a 33s PB, he also was the overall winner.

John West competed in the Australian Masters Championship in Tasmania. He came second in the 10km road walk in 1h21m26s. John also came third in the Javelin and was second in the Throws Pentathlon in Launceston prior to this.

This Sunday the run is at Berrilee Road. 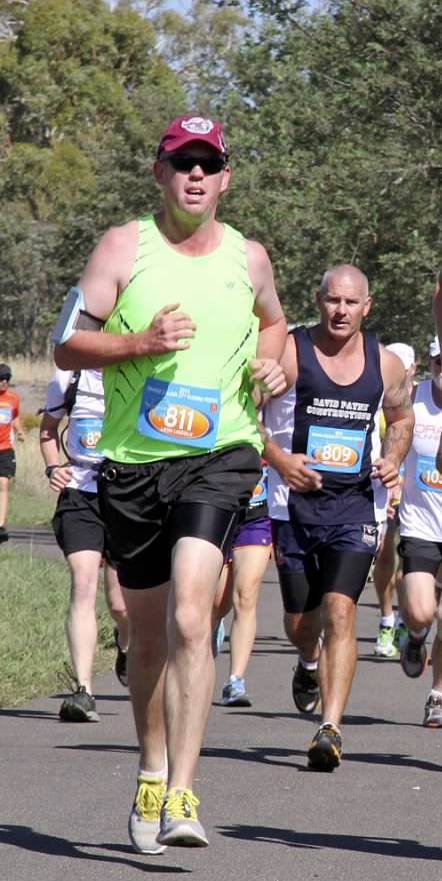 DOUBLE ACT: Rebecca Lincoln and Leon Lincoln have been big improvers recently, and kept things in the family this week by taking out last Sunday’s and Wednesday’s runs respectively.