On a warm Sunday morning 74 members took to the dusty track at Clergate in very warm conditions. The ladies were showing their speed over the 3km distance with Liz Simpson (12:08) setting the pace and finishing just in front of Amber Rich (12:40) and Nicole Williamson (14:00) running into second and third respectively. Sam Wilson (14:20) was the fastest of the guys, while Craig Penrose (16:48) secured second spot from his brother Brian (18:16). Mark Chapman (21:19) had ten seconds on Leanne Corcoran over the 5km course as they secured the top spots. Anthony Wilson (22:30) ran strongly to push Jackson Boucher (23:02) into third male home. Running at their consistent pace as usual, Karen Neal (24:24) and Lily Craig (25:31) captured the minor placings behind Leanne.

Around 80 starters for Wednesday night at Elephant Park with another warm afternoon ensuring runners had to work hard over the three laps. Jessie Dean (11:10) continued her impressive running form with a speedy 30 second Personal Best seeing her secure the fastest time overall. Ricky Bangert (11:43) was the fastest male on the day, just ahead of a very consistent Mike Cooper (11:53). Sam Wilson (13:25) also ran a 16 second PB to win on handicap, while PB’s were also recorded by Thomas Pell 2s, Greg Pell 9s, Leah Morphett 5s and Hugh Thornhill a massive 1m1s.

Don’t forget you can now enter in your chosen event at the Colour City Running Festival, so take advantage of the early bird entry period and get your entry in soon. The Festival committee will be looking for helpers soon, so please have a think about volunteering to do a role either leading up to, or on the Saturday or Sunday. If everybody does an hour here or there it will help make it another great event.

Also another event to keep in mind is the Australian Running Festival in Canberra on April 9 and 10. For many years we have had many members do this event and it would be great to have another sizeable contingent travel down for the weekend. It has 5, 10, 21.1, 42.2 and 50km distances.

This week the Sunday club run is being held at Jack Brabham Park. 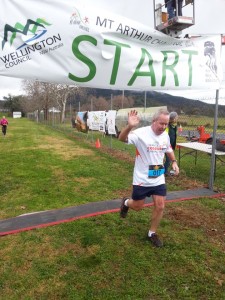