The first run of the New Year on Sunday at Elephant Park / Endeavour Oval course saw 86 starters take to the track. With a change to running in a clockwise direction, allowing the field to sort itself out in the Elephant Park area, before heading along the Woodward Street pathway, worked really well to provide a much safer run.

The placings across the three distances and their times were:

Also last weekend a number of our club members raced at the Dubbo Athletics New Years Carnival and had some outstanding results including:

On a very warm Wednesday afternoon at Elephant Park 35 brave members were out running the laps after the first man, Andrew McArdle, got the show on the road with a mass start for the smaller numbers. Mitch Williamson (9:33) and Nicole Williamson (12:24)fresh from their great weekend results set the fastest male and female times while Gary Holway (14:57) continued his preparation for the Orange Running Festival with a consistent run that secured him the overall win.

Runners need to get their entries in for this years’ Running Festival, which is on February 25/26. Early bird entries close January 26. There is an event for everyone from the Kids Pete’s Car Wash 2km, Hotel Canobolas 5km walk/run, Westfund 10km run/walk, Athletes Foot Half Marathon and JP Hotel Brokers Marathon.

If you don’t want to compete you can always volunteer some time to helping Stewart Vidler and his team organising and or running the event. There is a volunteers book at every club run, so get your name down and help out where you can.

The next Club run will be Sunday Jan 15 at the Botanic Gardens. 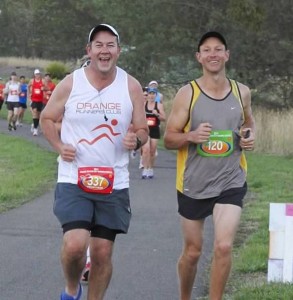 Photo of Stewart Vidler (left, with Terry Baker during the 2014 Colour City Running Festival) was in the winning relay team with Anna Daintith.