On the weekend a large contingent of Runners Club members travelled to the Nations capital to compete in the Australian Running Festival. Among many outstanding performances the standout has to be Mitch Williamson winning the 5km race in a super time of 15:55. Liz Simpson (19:13), was not that far behind Mitch, to finish fourth female and first in her 30-39 age group. Nicole Williamson (20:28) was third in the same age category while Jack Daintith (22:12) was second in the 16-19 age group. Others to complete the 5km run were Carrie Williamson (22:26), Hugh Daintith (23:44) and Keagan Wilson (56:39) who got a huge cheer from the crowd. In the 10km race our three runners performed well with Jamie Corcoran (50:03) surprising himself with a great time while Donna Read (56:06) and Sabrina Manickam (67:49) were both happy with their runs.

On Wednesday night at Elephant Park around 70 runners and walkers tackled the three laps after getting a run down from President Renai McArdle of the results from Canberra. Fastest runner on the night was Nathan Sutherland (10:31) while Ursula Wilson (11:42) seemingly fresh from her Canberra Marathon effort was the fastest female. Mark Harvey ran an 11 second Personal Best, to be the overall winner on the night, while Jackson Essex ran a great 17 second Personal Best as well. It was also noted that my mate Keagan Wilson backed up his huge effort at Canberra on the weekend with his first three lap effort at Elephant Park and recorded a great time of (31:56).

Finally I would like to wish my fellow NSW All Schools team mates and Runners Club members, Connor Whiteley and Jessie Dean, all the best for next week,  the three of us are competing in the National Triathlon Championships at Harvey Bay in Queensland “Go the blues”.

This weekend the Sunday run is at CSU, starting at 9am. 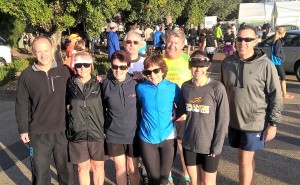