On Easter Sunday, a nice crowd of over 80 runners took advantage of a beautiful Sunday morning with a run around Lake Canobolas and an Easter Egg as a reward after they crossed the finish mats.

Doing the 3km distance and leading the way was Hugh Corcoran (13:39) with a strong run that will have him hot on the heels of his speedy mum in the not too distant future. Another young runner impressing lately is Sam Wilson (15:11) who came in second, while Bill Fairgrieve (16:20) got the third fastest time, before turning to his apprentice Easter bunny duties. Fastest of the girls over the one lap, 3km distance was Caitlyn Broadfoot (15:48) by a mere two seconds from her running buddy Lily Craig, while Emma Rolls (16:14) was not far behind them in third spot. Ursula Wilson (26:08) was the quickest over the 6km distance, with Leanne Corcoran (26:35) coming in next ahead of Amber Rich (26:53) who came in third. Paul Centofanti (26:24) was the quickest of the guys ahead of Ian Fisher and Frank Ostini (both 26:35) who were the next fastest. Young Sam Kiho (40:58) completed the 6km distance as well and picked up the overall win on the day. Frank Ostini then distributed the eggs for the kids Easter egg hunt which saw all the kids amongst the eggs.

On Wednesday night at Elephant Park over 100 runners recorded times on the regular course and we were also treated to the spectacle of some of the fast guys and girls doing their thing, with Mitch Williamson (8:43) and Connor Whiteley (8:54) the star performers. Connors effort was a 32 second personal best, which secured him the overall win and backed up his Little Athletics under 17 State gold medal he won in the 3000 metres in record time only a week ago. Liz Simpson (10:40) was not far off that pace as the fastest lady, just ahead of Nicole Williamson (11:11). Other personal bests were recorded by Jackson Boucher 9s, Jon Francis 7s, Leah Morphett 1s, Nathan Sutherland 1s and Jess Quinn 24s.

The Running Festival committee hosted a thank you BBQ for the volunteers who helped out at the event on Friday night at EP. A big thankyou to everyone involved in the success of that weekend.

For those runners intending to run at the Canberra running festival which is only a week away now (April 9 and 10), if you have not put your name down in the book to attend a Saturday Night dinner with other club members, I suggest you contact either Jane or Bill Faigrieve ASAP.

Membership for 2016/2017 will be due 1st April.  The rates are the same as last year – $70 per family, $30 per single adult, $15 for a child. Come 31st March the slate will be wiped clear and only upon payment of membership your name and chip number will became available for viewing on the computer.  Consequently payment as soon as possible works to your advantage.  Please give your money in an envelope with a completed registration form to Bill, who will process the payments until the AGM and thereafter the new treasurer will undertake the job. Speaking of the AGM, it is on next Monday April 4 at Anson Street School at 6pm with people asked to bring a plate / nibbles’ / dessert, as the club will organise some Pizza’s.

This weekend the Sunday run will be at Berrilee Forrest, starting at 9am. Don’t forget that daylight savings ends on Saturday night, so adjust your clock accordingly. 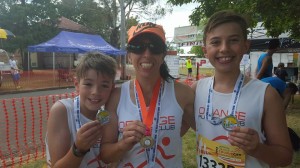