The long weekend saw a number of ORC members take the opportunity to participate in runs around the region.

On Saturday the much needed rain didn’t deter a group exploring the Henry Lawson Festival at Grenfell. Well done Flynn Thornton (1st Junior), Kate, Sam and Tilly Thornton in the 4km and in the 7km Erin Gibson, Dan Benton and Greg Thornton for braving the conditions. We hope you enjoyed a doughnut or 2 afterwards or some damper.

We hear a rumour that in a slighter more picturesque setting Anthony Daintith stealthily completed the Kiama half marathon but we are yet to confirm this sighting or a time. Strava might be able to tell us.

In the other direction congratulations to Meg Reeves for winning the Wandi Cross 5k trail run. For those unfamiliar with country Australia geography, we have learnt thanks to Meg that Wandi is actually Wandiligong, a town in north eastern Victoria. This family must love a car trip!

A couple of members have gone missing now the cold June days are upon us – if anyone sees Stewart or Letitia Vidler or John Moss please gently remind them the Club still meets every Wednesday and Sunday. Meanwhile it’s great to see China making a comeback with the Club and running well. Might need to organize a fishing trip as a reward if he keeps those times up.

A few Save the Dates for the calendars to keep us motivated during the winter months. On 7 July President Anthony is gathering a big bunch of us for a Pizza Night at the Hotel Canobloas. Contact Anthony to add your name to the list.

The Dubbo Stampede, always a fun event, will be run on 26 August around Taronga Zoo. It would be great to see a sea of ORC orange and grey in amongst the meerkats. Check out Facebook for details of the run options.

On 1 September get your glad rags out for a special dinner to celebrate the Anniversary of the ORC. John Betts has promised dancing so dust off those suits and mark it in your calendar.

See you at Berilee Road on Sunday at 9am for some fun on the hills. 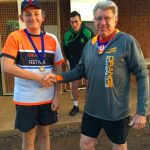