This weekend saw 80 runners club members at Gosling Creek for the Club run, three trail running members tackling the testing six foot track in the Blue Mountains and then there was around twenty members travelling to Cowra to compete in their local running festival.

At Gosling Creek the long course runners (9.6km) did the old track that includes one lap of Bargwanna Road, with a loop of the 2.3km Gosling Creek walk path, to start and finish. In the long run Iain McLean (37:42) put in a powerful performance to finish in front of Nathan Sutherland (38:34). Joel Kitto (45:31) was the next quickest runner to pick up third spot in a fairly even chase pack. Relatively new member Jess Quinn (54:38) was a clear first lady finished, with Julie Hudson (59:36) finishing second fastest just four seconds in front of Pam Fullgrabe. Nearly forty starters overall in the two loop 4.6km run, with Jack Daintith (20:32) the fastest and of the guys, Paul Centofanti (21:18) claimed second place ahead of Jackson Boucher (21:37). Leading the girls home with another great run was Amber Rich (20:58), while Caitlyn Broadfoot (22:08) secured second and Ella Lamrock (23:46) third. Doing the one lap 2.3km distance Sam Wilson (11:53) was the fastest, with Bill Fairgrieve (12:58) and Bailey Penrose (13:14) next best of the guys. The consistent Tanya Connolly (12:49) just got home first in the ladies four seconds in front of Emma Rolls, while Caitlin Edmonstone (14:08) was third. Not too far behind Caitlin was Arabella Harvey (14:29) who picked up the overall win for the day.

At Cowra there was a slight delay before the start of the half marathon as organisers waited for a little more natural light. Once underway the small field spread out over the hilly course. In the end Ursula Wilson (1:38:51) came in second overall behind Alison Stephens, while Mike Cooper (1:39:56) and Daryl Roweth (1:41:58) were relegated to third and fourth respectively by the girls. In the 10km race on a similarly tough course as the half, Nicole Williamson (44:39) was second female finisher behind Christine Wolfson while John Betts (56:56) did well conquering those hills.

Carrie Williamson (23:01) and Karen Neal (23:52) dominated the 5km event to be first and second overall while other club members to complete the race were:

For those runners intending to run at the Canberra running festival on April 9 and 10, there will be a book at the next few club runs so you can put your name down, if you would like to enjoy a Saturday Night dinner with other club members.

There will be an Easter egg hunt for the kiddies on Easter Sunday after the after the run at Lake Canobolas.

Relay for Life is on 2 April and everyone is invited to join Sandy Ostini’s team – Robin Hood.  If you would like to get involved please go on the Relay For Life website and put your name down on Sandy’s team.  You also have the option of just joining Sandy on the Saturday/Sunday and completing as many laps of Waratahs as you like and of course a donation would be greatly received.  Finally, if you want you can give a donation via our club.  Please put your donation in an envelope with your name and address on the outside and give to Jane who will make sure Sandy gets it.  All donations over $2 are tax deductible. Please help Sandy in this endeavour and as you know Sandy has played a big part with ORC over previous years so this gives you the chance to do something for her and to say “thanks” for everything she has done for our club.  Any donations you care to make will be collected for the next couple of weeks.
Membership for 2016/2017 will be due 1st April.  The rates are the same as last year – $70 per family, $30 per single adult, $15 for a child. Come 31st March the slate will be wiped clear and only upon payment of membership your name and chip number will became available for viewing on the computer.  Consequently payment as soon as possible works to your advantage.  Please give your money in an envelope with a completed registration form to Bill, who will process the payments until the AGM and thereafter the new treasurer will undertake the job.

There is no club run this Sunday due to the Great Volcanic Challenge with many members either running or volunteering. 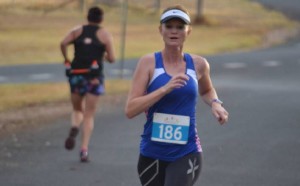 ON THE RUN : Carrie Williamson winning in the 5km race t the Cowra Running festvial