On the weekend 88 runners ventured to Clergate for the Sunday morning run with a number of outstanding performances. Carrie Williamson ran a strong 3km to be the fastest female runner in a time of 14:36 to be the overall winner for the day as well. Coming in behind Carrie to fill the placings were Grace Srzich (16:00) and Tanya Connolly (17:10). The boys had a great battle for the fastest time in the 3km run with Darcy Hamling (13:52) narrowly edging out Logan Whiteley (13:54) with Sam Wilson (14:33) not that far away in third spot.

Also on the weekend some of our members competed in the Fernleigh 15km race at Lake Macquarie. Tony Fitzpatrick finished in 1:17, Julie Fitzpatrick 1:40, Russell Tym 1:33 and Tony and Julies Daughter, Rhianna just snuck under Tony’s time with a 1:14.

Don’t forget the Christmas party and presentation coming up on Saturday December 28 at the Nashdale hall starting at 3pm. Cost is $5 each or $10 per family. Put your names down in the blue book at each upcoming run and get your money in.

This weekend the run is at the Botanic Gardens. 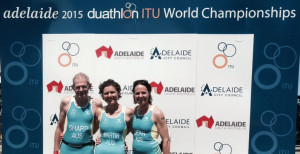