Last Sunday, Orange Runners Club held its regular weekly Sunday at Bargwanna Rd, where 61 members had a choice of 3, 5 and 10K routes, based on an out-and-back configuration. The first 3 finishers by gender for each distance are as follows:

A big thumbs up to all who participated, Sue Betts was declared the winner. Just before the Sunday Run, Leanne Corcoran was presented with her 200 run participation medal.

Externally, the club was well represented at a variety of events. Sam Collins finished the Sydney Half Marathon in a time of 1:19, a truly fantastic effort.

At the UTA Trail Running festival in the Blue Mountains, members took part in a variety of events. For the 22K event, members who took part were Adam Reeves (2:24), Joel Boardfoot (2:37), Katrina Smith (3:06), John Betts (3:22), Kim Dale and Jess Richards (times not available at time of writing), and Lauren Beels (3:54). Meg Reeves completed the 951 stair challenge in 10m49s (and coming 3rd!). Leanne Corcoran completed the 50K event in 6h 9m, and Mitch Essex put in a superhuman effort to complete the 100km event in 16h 19m. Not to be outdone, Henry and Banjo Reeves completed the 1km kids event as well!

This Sunday sees the club back at Bulgas Rd for our regular Sunday Run where members can try 3K, 5K 10K and 14K routes in very hilly terrain. This coming Wednesday sees the regular 3-lap handicap event at 5pm. This will be our final 5pm event with handicap start until September – as per winter protocol, 6th of June sees a start time of 4:45pm and mass start due to low levels of light. 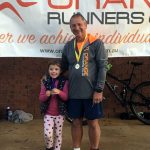