A trip out to Clergate on Sunday for the Club run, saw 68 starters cross the timing mats. Congratulations to Nicola Bailey who completed the 5km distance in 28:50 to be the overall winner on the day, while hopefully Bill Fairgrieve is ok after having a fall in the early stages of the run.

The placings across each distance and their times were:

Last weekend a number of our runners and walkers headed to Dubbo for the NSW Athletics Country Championships. John West competed in the 60 – 69 age category and was first in the 3000m walk in a time of 20:31. He finished third in the Discus and Javelin, fourth in Shot Put and Hammer Throw. Others who competed and their results were:

The day before Australia Day and a smaller turnout than normal of around 50 starters at Elephant Park crossing the timing mats. Before the run Stewart Vidler reminded everyone to get entered for the Orange Running Festival. Also, volunteers are still required for the Running Festival weekend, so get your name on the list and the volunteer coordinator will contact you closer to the event with your jobs for your nominated day / time.

In the running, young gun Rikky Bangert (10:55) continued his impressive recent form to set the fastest time of the night while Ella Lamrock (12:43) was the fastest female. Overall winner was Lauralie Francis who ran a consistent three laps to record an overall time of 14:35.

Setting Personal Best times for the 3km run were Erin Gibson (17:51) with a 1m 4s improvement and a young guy who has been making an impression at both Runners Club and Parkrun, Elliot Bangert (12:22) for a 12s improvement.

Runners need to get their entries in for this years’ Running Festival, which is on February 25/26. Early bird entries close January 26. There is an event for everyone from the Kids Pete’s Car Wash 2km, Hotel Canobolas 5km walk/run, Westfund 10km run/walk, Athletes Foot Half Marathon and JP Hotel Brokers Marathon.

This Sunday Jan 29, the Club Run is at Bulgas Road, starting at the regular time of 9am. 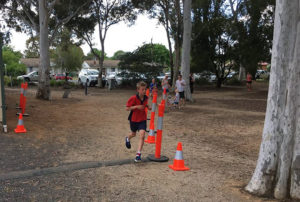 Photo of one of the clubs big improvers, Elliot Bangert crossing the timing mats at Elephant Park.