Last weekend the club run was held at the challenging Bulgas Road track. Adding to the course difficulties was the early morning warm temperature. This did not deter the runners club members with 87 starters taking on the task of one of the three distances. Oliver Chandler-Sullivan was the overall handicap winner after completing the 3km distance in 16:51 as he finished just behind the top three finishers.

The placings across each distance and their times were:

On Wednesday at Elephant Park 56 starters crossed the mats on another hot afternoon. Leading the way as he has done recently was Rikky Bangert who set the fastest overall time of 11:57. Hot on his heels though, was little brother Elliot, who set the second fastest time of 11:59, which was a 23s personal best as he continues his recent improvement. Ursula Wilson was the fastest female as she ran 13:18 for the three laps.

Michelle Hayes was the handicap winner after running a consistent time of 16:14.

This Sunday the Club Run is at Bargwanna Road, starting at the regular time of 9am. 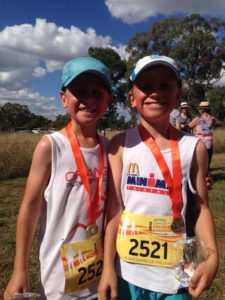