Last Sunday the club run was held at Bargwanna Road near Gosling Creek  with 81 starters across the three distances it took a great effort from Sjaan Wilson (22:56) over 3km to take out the handicap win on the day. There were so many stand out performances highlighted by the major placegetters as listed below.

On Wednesday at Elephant Park 60 starters completed their run against the clock with Meg Reeves setting the fastest time of 10:49 to lead the way just ahead of Rikky Bangert who ran 11:07. New member completing his fourth run, Noel Annett set a 22s Personal Best while Bec Davis completed a 1m21s Personal Best. Overall winner on the night was Edward MacLean who ran a very consistent three laps to finish with a time of 14:36.

An important reminder that the Clubs AGM will be held on Wednesday 1st March 2017 at Elephant Park from 5.30pm onwards with a (BBQ) Dinner provided.
ALL (Club and Festival) positions will be declared vacant and members shouldn’t presume that the members who have undertaken a role for the past year(s) will be continuing and would be grateful for some assistance and/or to have a break.
Members are encouraged to attend the AGM to ensure they have their say in the clubs future.

Also a reminder that the Running Festival is only a few weeks away (February 25-26), so get yourself entered for an event. There is a distance for everyone. From the 2km for the kids to the 5km and 10km fun runs and the 21.1km Half Marathon and 42.2km Marathon.

If you can also help out for an hour or two before or on the days of the event, please put your name down in the volunteer book or see one of the committee members at the next club run.
This Sunday the Club Run is at Lake Canobolas, starting at 9am. 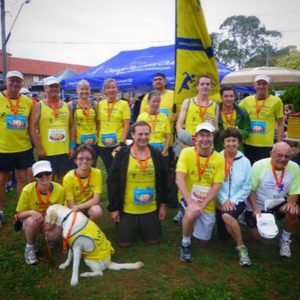 Photo of some of the Achilles Running Club members at a previous Orange Running Festival. These runners, with disabilities, are inspirational as they compete with their guides over the various distances.