Last Sunday on the hottest day in Orange history, the club run was held at Lake Canobolas, with 82 starters completing the four distances with the starting temperature at 9am of 30°. Overall handicap winner was Sharon Fahy who completed the 5km distance in 38:44.

Also on the weekend, a number of our Junior athletes competed at Dubbo in the Regional Championships for Little Athletics, not all results or names of those competing are known at this stage but congratulations to all that did compete in very testing conditions.

On Wednesday at Elephant Park 71 starters completed their run against the clock with Mitch Essex setting the track alight with a super quick 8:45 while sister Nicole was third fastest overall as she recorded a five second personal best time of 11:09. Setting personal bests two weeks in a row were Bec Davis 26s and Noel Annett 1m 4s. With Noel also securing the overall handicap win with his outstanding run.

A reminder that the Clubs AGM will be held on Wednesday 1st March 2017 at Elephant Park from 5.30pm onwards with a (BBQ) Dinner provided.
ALL (Club and Festival) positions will be declared vacant and members shouldn’t presume that the members who have undertaken a role for the past year(s) will be continuing and would be grateful for some assistance and/or to have a break.
Members are encouraged to attend the AGM to ensure they have their say in the clubs future.

Also a reminder that the Running Festival is only a week away (February 25-26), so get yourself entered for an event. There is a distance for everyone. From the 2km for the kids to the 5km and 10km fun runs and the 21.1km Half Marathon and 42.2km Marathon.

If you can also help out for an hour or two before or on the days of the event, please put your name down in the volunteer book or see one of the committee members at the next club run.
This Sunday the Club Run is at Gosling Creek, starting at 9am. 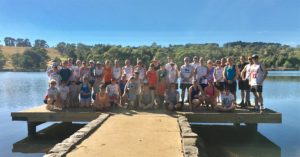 Group photo of many of the Runners Club members at Lake Canobolas ready to run last Sunday.