On Sunday runners enjoyed the Relay challenge with many great partnerships drawn. Fastest on the day was the team of Adam Reeves and James Harvey who completed 3 laps each and 6 laps altogether in the super quick time of 21:59. A very impressive team of Hugh Corcoran and Karyn Vardanega scored the second fastest time of 24:19, while just eight seconds behind were the third fastest team of Cassie Harvey and Meg Reeves.

When the handicaps were taken into account the overall winners were Sally Kitto and Chelsea Gregor with a combined handicap time and run time of 1:04:33 to win the day. Coming in second spot were John Hannan and Jamie Corcoran 1:06:08 and third spot went to Adam Reeves and James Harvey 1:06:17.

Congratulations to our fundraising pocket dynamo Ella Lamrock, who had her hair chopped off. Ella raised around $2500 for her Cancer charity and also donated her hair for a wig for a cancer patient.

Brett and Emily Sammut  competed at the Yass Valley Running Festival where they ran the 5km race together finishing in a time of 43:53. Brett also did the half marathon which included a few little hills. Brett’s time was 2:04:37.

Also on Sunday in Canberra Judy Tarleton, Brian Sharp and Kinisha Roweth all competed in the ACT Duathlon Championships (run 10km, cycle 40km and run 5km) with all three wining their respective age group to be ACT champions.

On a beautiful Wednesday afternoon and again with the school holidays on, a slightly reduced turnout of 81 runners and walkers tackled the weekly event known as Runners EP (Elephant Park) 3k. The great weather brought some great results with Anthony Ellison running a Personal Best as he secured the fastest 3 laps on the day with a 10:25, beating regular top place getter Jack Daintith by a few seconds. Fastest of the girls was Hayley Arden, who ran 12:09 which was also a PB for her and placed her three seconds faster than Ursula Wilson. Alicia Ross was also hot on the heels of those girls as she continues her rapid improvement. Ben Fairfax was one of many standout performers being declared the overall winner after running a quick 12:42 which was a massive PB for him as well.  There were many Personal Bests achieved on what appeared to be a fast night overall with Anthony Ellison 4s, Andrew McCauley 12s, Ben Fairfax 1m48s, Alicia Ross 6s, Brett Sammut 18s, Fiona Montgomerie 16s, Karyn Vardanega 20s, Hayley Arden 10s, Arthur Locke 1m45s and last but not least Debbie Searle a huge 5m12s improvement.

A reminder that the Club Christmas Party / Presentation is coming around very fast. It is scheduled for Saturday November 28 at the Nashdale Hall, so if you wish to nominate someone for one of the runner of the year awards, please see one of the committee members for a nomination form.

This weekend the Sunday run is at Kinross Forrest starting at 9am. 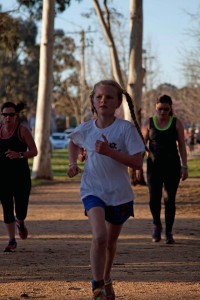