On Sunday runners club members had the choice again of doing the Kinross Trail run, Endeavour Oval club run or even both events. At the trail run, 20 runners accompanied by a few dogs took on the Kinross (mostly mountain bike) tracks and club President, Anthony Daintith decided, after almost face planting at the start, to shorten the short course to 5km and finished in a speedy 38:13. Also choosing the slightly shorter distance was Anne Maree Ryan 46:40, Alex McLean 46:50 and Anna Daintith 49:12.

Over the 6.5km course, The Bangert family dominated with Rikky flying around the track in 38:47, while Fred and Elliot 50:02 led the rest of the field home. Annabel Hosie ran with son Tom, with the pair finishing the 6.5km run in 58:36.

Setting the pace for the ladies, Leanne Corcoran ran 1:23:53 while Alison Spurway, fresh from her 50km Stromlo run recently completed the run in 1:42:00.

Then at the Endeavour Oval Club run 64 starters crossed the timing mats and completed 1 – 4 laps of the course.

The fastest runners over the four distances were:

Overall winner was Rebecca Essex who completed the 1 lap 2.83km course in 34:19.

On Wednesday at Elephant Park, 52 starters took on the course this week with the fastest 2 runners being the only ones to set personal bests on the night. Tim Guy ran an 11s PB with the fastest time of 9:56, while Peter Finlay took 13s off his previous best time coming in second with a 10:42. Joel Broadfoot scored the third fastest times running 11:16. For the ladies, Carissa Hickey was the fastest with a time of 12:21 and Lily Craig second in 12:43. The two Alicia’s, Anlezark and Ross finished third with identical times of 13:35.

The overall handicap winner is was Audrey Schonknecht who ran 16:45 for the 3 laps.

Tonight will see the club celebrate the year of running with the Christmas Party and Presentation at Waratahs Sports Club starting at 5:30pm.

The day after (Club run on Sunday) will be at Highland Heritage starting at 9am with 1 – 5 laps of the 2km course. The Merv’s coffee van will be on site on Sunday for some refreshments after the run.

A reminder to think about / enter the Orange Running Festival (Held on March 7 & 8 2020 at Gosling Creek). There is an event for everyone, from the kids 2km on the Saturday afternoon to the 5km, 10km, Half Marathon and Marathon on the Sunday morning. Also the committee will be looking for volunteer helpers prior to and during the event, so please put your hand up to help in the new year, or contact Mike O’Mara for more information.

Trail runners and dogs at Kinross Forest on Sunday 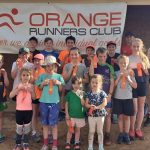 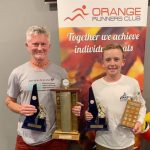