On a spectacular Sunday morning around 70 runners club members enjoyed the superb running conditions to have a run along the quiet Clergate road. Taking off from the call to start, the mighty Logan Whiteley took off like Usain Bolt to easily be the fastest over 3km finishing in 14:52. Next best of the lads was David Craig and Martin Ryan. Leading the ladies home was Tanya Connolly (16:42) followed by Joy Harvey and Monique Connolly rounding out the placing’s.

In a quick and competitive 5km race Jack Daintith (20:23) led home a field of 21 male and 19 female runners where the top 10 runners finished within 3 minutes of Jack. Iain McLean and Peter Mueller were second and third respectively, while Amber Rich again was the fastest of the ladies in 21:01. Relativeley new to town Meghann Coffey ran well for second spot while Pip Farquharson held firm for third fastest.

Ian Spurway ran a hybrid 8km run in 39:20 to be in a league of his own. The course marker, Mike Cooper, did his usual trick of starting after everybody else and running through most of the field to finish with the fastest 10km time of 46:08. Anthony Daintith, who was first across the finish line and was only a few seconds slower than Cooper, while Daryl Roweth finished third, after a race to beat his sister Kathy Penrose, to cross the finish line. Pam Fullgrabe pushed on to complete the 10km in 56:06 and finish in front of President Jane Fairgrieve. Michael Halls picked up the overall win completing the 5km course in 28:13.

At the Australian Duathlon Championships in Adelaide which doubled as the Oceanic Championship and double qualifying points race for the 2015 Duathlon World Championship, again in Adelaide. Among the many strong performances from runners club members, Judy Tarleton and Janet Martin won their respective age groups, while Brian Sharp and Jessica Richards were second in their categories and Estelle Dean picked up third spot. All are now automatic qualifiers for the Australian Team for World Championship. Many other runners performed well with top 10 finishes and will wait for the final pointscore to confirm qualification.

This weekend the Sunday club run is at Botanic Gardens with a 9am start. This run has a good range of distances, with the choice of 1 lap (1.6km) to 5 laps (8km). 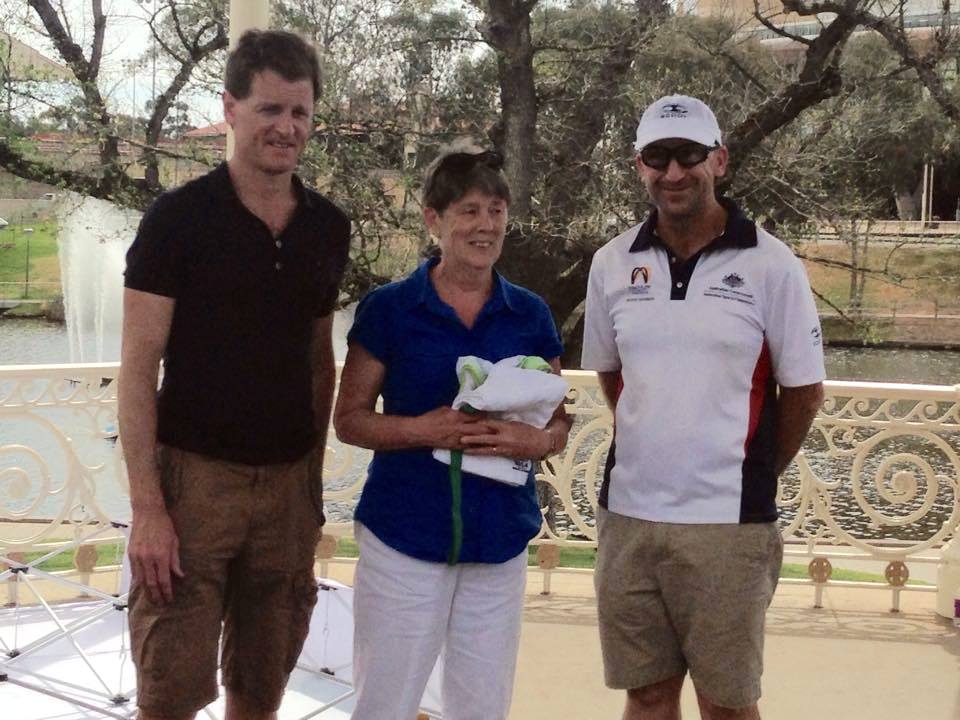 CHAMPION: Judy Tarleton (centre) at the presentation after winning her age category at the Australian Duathlon Championship in Adelaide last Sunday.