Forbes turns up the heat for strong field

On Sunday, a strong contingent of runners from the Orange Runners Club made the trip to Forbes for the annual Forbes Fun Run, which incorporated the inaugural half marathon around the lake. Runners were met with hot and blustery conditions, with the lake’s two water fountains doing their best to keep everyone cool during the event.

Runners in the half marathon started at 7am to try and beat the heat, with Ursula Wilson running the 21.1kms in a very respectable time of  1hr35min and even though she was sent the wrong way, still managed to be first female home and fourth overall. Looks like Ursula is peaking at the right time, with rumours doing the rounds that she will be running the Carcoar marathon next month, hoping to get a qualifying time for the legendary 6ft marathon in 2015. Mike Cooper was fourth male in 1hr36, Brett Sammut was eighth male, running a personal best of 1hr43 and Anthony Daintith being the next home in a time of 1hr44. New kid on the block Jaimie Hampton ran her second half in a very respectable time of 1hr51.The 10km race saw things heating up, with temperatures nudging 30 degrees and quick times out on course. Christine Wolfson won the female division and was third overall with an amazing time of 40m59s. Suzy Cohen managed third female in 48m5s. Other notable results were Wayne Stewart (50m6s), Graham Fahy (58m49s), Renai McCardle (1h1m) and Sharon Fahy (1h8m).In the 5km race, Amber Rich finished second female and fourth outright in 22m8s, Bill Fairgrieve in 26m24s, Lachlan Ross in 25m42s, Cameron Ross 35m2s, Alicia Ross 35m2s, John West in 38m57s and young Ethan McCardle rounding out the results in 40m23s.

In Melbourne the ladies clocked up 15 kms on the Saturday from walking around the shops and the Running Festival Expo! Then they fronted up for the half marathon on a glorious Sunday morning. The course was very picturesque, flat and 11,000 participants in the half. Orange Runners Club members – Robyn Cotton – 1:42, Pam Fullgrabe- 2:06, Jane Fairgrieve – 2:08, Lynda Chapman – 2:09

At Gosling Creek on a nice Sunday morning, Tony and Julie Fitzpatrick busted out a quick 1 lap (2.3km) to win their respective category.  Tony (11:25) lead home Finn Scott and Alex Irwin, while Julie (13:31) had enough pace to outlast Tanya Connolly and Grace Srzich. Finishing just behind in fourth spot, Joy Harvey (14:21) took out the overall handicap win.A hot field in the 2 lap 4.6km course saw Jack Daintith (20:13), beat home Jackson Boucher and Peter Mueller. In the ladies Josephine Kitto has a lot to live up to once she starts running, as dad Joel pushed her around in a slick 23:33. Michelle Srzich (24:44) was next female to cross the line ahead of Lily Craig and Julie Chapman.Doing the long run (9.6km) which includes the run out Bargwanna Road plus the 2 laps of Gosling Creek, Nathan Sutherland was out on his own running a quick 36:46.  The improving Paul Centofanti took second place ahead of Daryl Roweth. Paris Meates was the only lady to tackle the long run and finished with a very respectable 59:45.The Penrose Bros, Craig and Brian made up their own distance doing a 7.6km ‘Penrose run’, with Craig finishing in 43:36 and Brian not too far behind him.

A cool Wednesday at Elephant Park saw some good times with Anthony Ellison the quickest at 10:29 for his 3 laps which was also a 3 second personal best (PB). Other PB’s were recorded by Sally Kitto 2m16s, Kath Mcmaster 11s, Pip Farquharson 17s and Chris Cameron 2m44s. The overall winner was Emily Nobbs who ran a very consistent 14:57.

There are club running singlets available for purchase. Please see Bill, Jane or Graham to find out more.

This weekend the Sunday club run is at Clergate School with a 9am start. 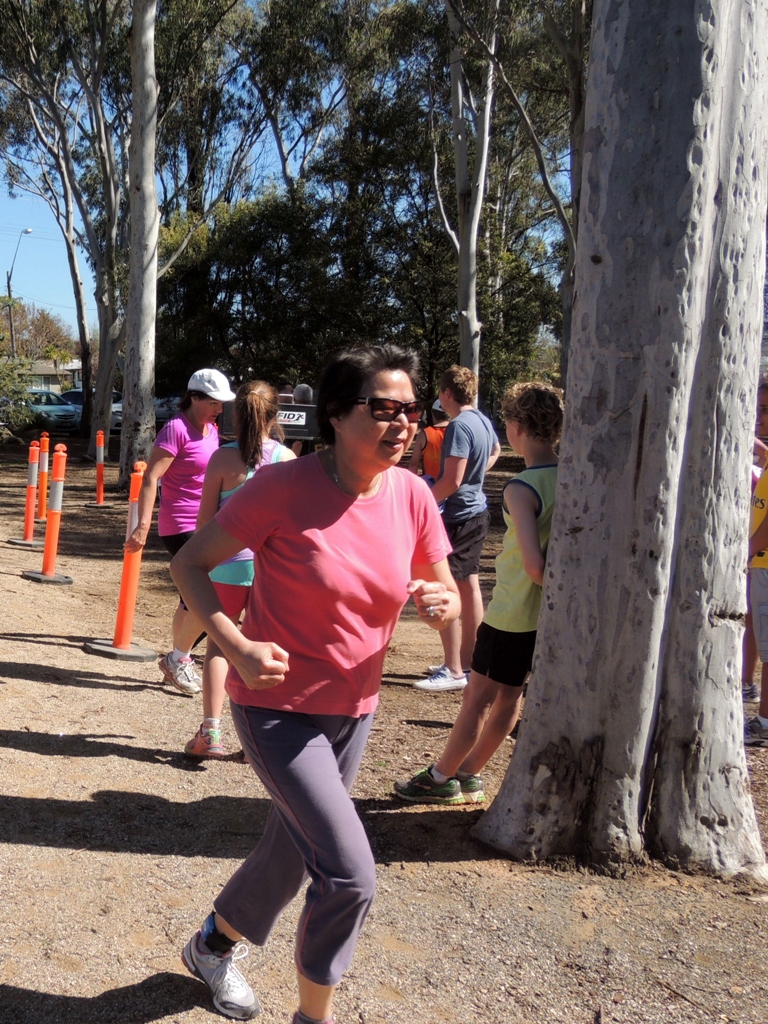 HAPPY RUNNER: Man Ha Mackay is a relatively new member who has shown great improvement and enjoyment from her involvement with Runners’ Club.