Frank cranks it up

On Sunday our numbers were divided between our regular ORC run at Clergate and the Parkes fun run.

Firstly at Clergate and 64 runners and walkers were out doing their thing on a beautiful morning for running. 10km runners were treated to 2 loops of the 5km track. This seemed to raise question marks for many of the runners, to do or not to do, with 1 lap of the 5km’s proving the most popular choice.

The 3km run saw Liam Sharp (14:54) edge out the timekeeper, Michael Sharp and James Harvey who pipped Busta Connolly for third. Cleopatra Nam (17:08) was the fastest of the ladies finishing just ahead of Tanya Connolly, who picked up the overall win on the day and Joy Harvey in what was very close finish.

Doing the 5km loop Mitch Essex (20:43) was the fastest ahead of a tight battle for second between David Craig and John Connolly, with David getting home by 6 seconds. A similar margin separated the first 2 ladies with Ella Lamrock (23:26) besting Lily Craig with Katherine Lindsay not far behind in third.

Joel Kitto was in a league of his own as he cruised in to register a time of 41:02 for the 10km run. Daryl Roweth and Mike Cooper ran their normal consistent races to finish second and third. Leanne Corcoran ran with son Hugh for the first 5km’s before completing the 10km in 47:35 to finish ahead of Kim Jarvis and Rebecca Lincoln.

At Parkes some outstanding efforts were highlighted by a determined 5km run by Frank Ostini to be the first Male home in 19m:29.80s and Amber Rich also running a strong 20:00 in the 5km to finish second female. Fifteen year old Connor Whiteley had a fantastic 10km race where he finished second overall with a superb time of 37:16.80.

In the 2km race young Logan Whiteley finished 6th overall in time of 8:54.24 to be the first in the 9year old age category across the line.

In the recent Australian Mountain Running Championship held in Canberra, Brian Rix finished first in the 70 and over category in a time of 58:14 for the 6km testing course. Also running strongly and picking up a third place in the 60 -65 category was Russell Tym who also ran a strong 56:38.

Wednesday at Elephant Park and another night with around 130 odd runners and walkers were out in the fresh afternoon air. Anthony Daintith was awarded a certificate recognising his 300 runs with the club. Connor Whiteley and Brandon Connolly set the night’s equal fastest time of 9:54 as these young speedsters flew across the track. Kate Hogben’s consistency shone through on the night as she ran a 16:09 to land the overall win on the night.

Tip of the week: Runners and walkers in groups are asked to always leave room for faster runners to pass in either direction without them having to leave the track / path and risk injury on uneven ground.

FINAL BURST: Frank Ostini charges home to be the first male to finish the 5km event at the Parkes Fun Run. 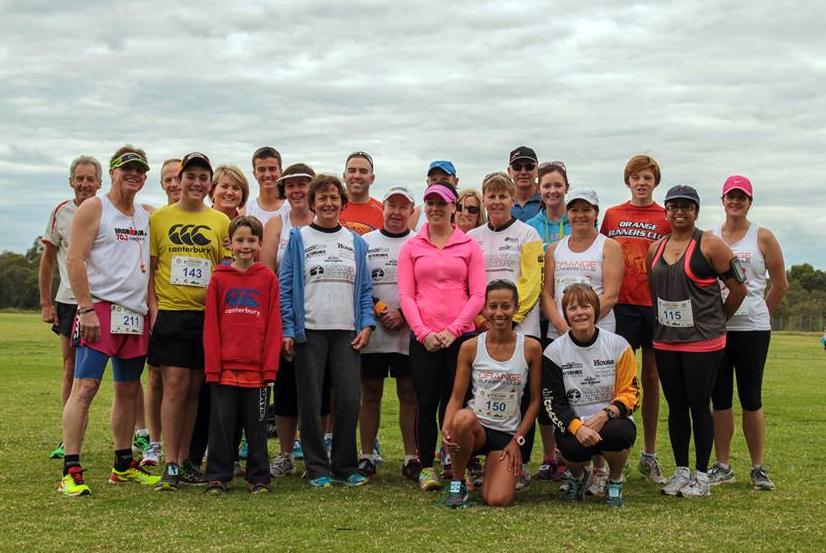