Run gets to core of festival

The Mother’s Day Sunday Club run at Kinross Forrest doubled as the Apple Festival Fun Run.  The day also saw a change to the course with a straight out and back run for all 3 distances due to a few events on in the same area.

In the running, the 3km event saw Nathan Sutherland follow up on his runner up to Mitch Williamson in the Bathurst 10k, with a slick time of 11:15 to finish ahead of youngster Logan Whiteley and the experienced Graham Fahey rounding out the top three.  Young gun, Ella Lamrock (15:04) was impressive to be a clear winner of the ladies 3km, with Joy Harvey finishing in front of equal third placed Trish Stephens and Chelsea Gregor.

In the 5km run a hot field led by young speedsters Brandon Connolly (21:05) and Connor Whiteley (21:06) saw off the determined Frank Ostini by less than a minute. Ladies winner Amber Rich was not too far behind the leading men as she ran away from the rest of the women’s field to finish with a time of 22:47. Lily Craig who declined to run as an apple ran well for second place and Jo Mckenzie came in third.

In the 9.1km tester 1st placed Peter Mueller ( 41:26) worked his way from the back of the field to ‘out Coop’ Mike Cooper, who wasn’t too far behind. Daryl Roweth finished with the 3rd fastest time with a solid effort.

Of the ladies, strong performers from the previous weekend at Bathurst and Port Macquarie were backed up with more outstanding efforts at Kinross. Ursula Wilson (43:51) was the quickest, turning the tables on fellow half marathoner Leanne Corcoran. Fresh from a brilliant Ironman performance Jessica Richards followed them in just behind in third. While mentioning Jess, congratulations to her, Melissa Fogarty and Tony Syme on their great Ironman efforts and apologies for leaving them off last weeks report.

Kath Thompson would like to thank everyone for their support of the apple festival with runners from Canberra and Grenfell attending as well as locals and the regular runners members. A big thankyou to Lily Craig who dressed up as an apple, and there were apples available for runners at the finish as a great reward.

On Wednesday Night at Elephant Park we had another huge night with around 132 runners and walkers out to do their 3 laps as quick as possible. Mitch Williamson returned to set the nights fastest time of 9:23, while Scott Finn was the overall winner on the night, when he recorded a very evenly ran 13:52. A huge number of people equalled or beat their previous best times on the night as runners strive to improve their personal fitness.

Please arrange completion of your registration form and payment direct to Bill or Jane Fairgrieve as they are now overdue. You need to be a member to continue to run at club organised runs.

Tip of the week: An apple a day helps keep the doctor away, and so does walking or jogging with the Orange Runners Club !

The run this Sunday is at Clergate School at 9am. Also a quick good luck to members David Ross, Kate Brien (and training partner Lisa Watt) in the North Face 100. 100km of running through the Blue Mountains, wouldn’t be many hills in that. 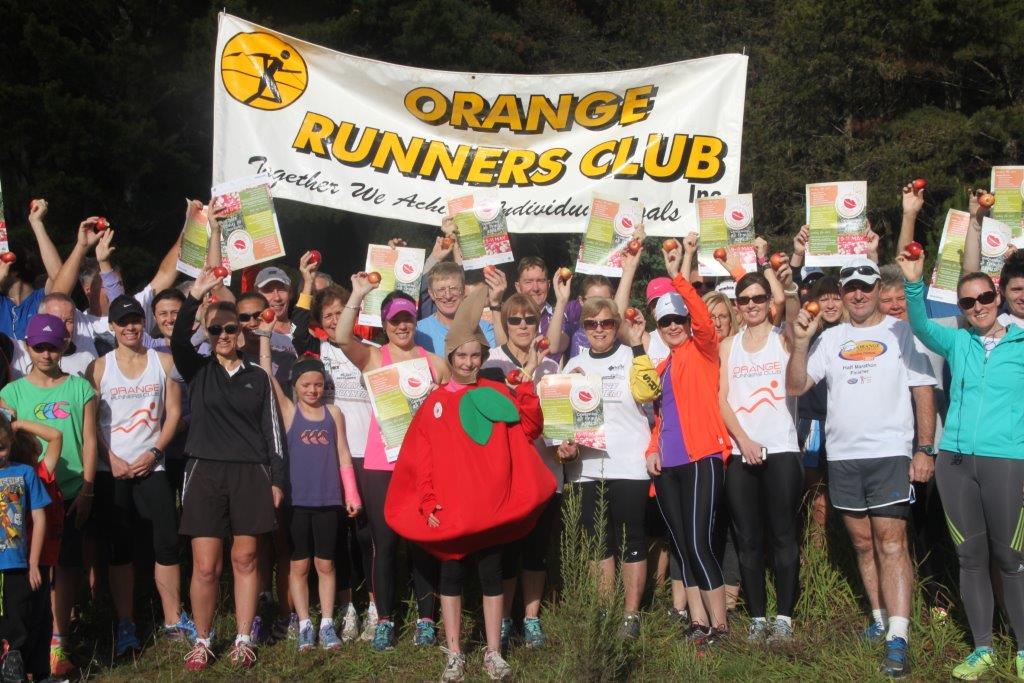