Grace and Abby Battle it out

On Sunday, due to Jack Brabham having visiting Sydney sides for the Champions of Champions soccer matches, our club run, was relocated to nearby Gosling Creek. It was a beautiful morning with many members feeling the heat by the end of their run.

Grace Srzich (12:02) and Abby Dean (12:06) powered around the one lap in a very close fought battle, to finish clear of Tanya Connolly (15:31) who lead home the chase pack. Trail Running David Ross (12:10) resembled a bandaged bear, after a run in with a tree during a run in the Blue Mountains on Saturday, but still had enough zing to be the fastest of the guys. Phillip Homer (14:39) ran a solid race to finish second in front of the third fastest, John Connolly (15:07).

A few people made their own distances up with Michelle Srzich doing three loops of the Gosling Creek track for a total distance of 6.9km and in a time (37:50). John Bowmer (45:30) and John Betts (46:22) both decided 7.3km would be enough for them with further injury a concern.

Ursula Wilson was the quickest over the longest journey of the day. She completed her 9.6km run in (43:08) to finish ahead of an easy running Estelle Dean (43:46). Coming home in third spot was Kinisha Roweth (53:46). Of the guys, ‘dad’, Daryl Roweth (43:55), got his first ‘fastest time finish’ since joining runners, but in David Ross’s words, he was well and truly chicked by Ursh and Estelle.  Joel Kitto (45:38) and James Harvey (46:22) both had solid runs to pick up second and third spot.

On Wednesday night another nice day, although a little chilly by start time, saw around 113 runners and walkers tackle the Elephant Park three lap run. Jack Daintith was again the quickest with his mark of (10:27) while Jessie Dean ran a fast (11:40). Ethan Crisp (11:08), like Jessie Dean, ran a Personal Best time for the three laps and in the process, secured the overall win. The list of the many runners to run PB’s and how many seconds they took off their previous time, were:  Tim Scrimshaw 6s, Ethan Crisp 37s, Nicholas Thomas 12s, Oliver McLean 1m6s, Kim Broadfoot 3s, Jessie Dean 2s, Ella Lamrock 14s, Alicia Ross 6s, Lachlan Ross 6s, Karyn Vardanega 6s, Chris Hayward 12s and Emma Hook 2m58s.

For anyone who has joined Athletics NSW for the 2015/2016 period, please see Jane or Bill for information provided to us by Athletics NSW.

Thank you to the person that took Cherie Ryan home on Wednesday night from Elephant Park. Could you please see Jane or Bill at the next run.

Don’t forget that Ella Lamrock has a collection tin at each run and also we will have our Fluoro day at Elephant Park at the relay/BBQ Sunday 27 September. The BBQ is free, however it would be good if people could put a donation in Ella’s tin at the BBQ. Ella will be cutting her hair that day and there will be a couple of prizes for the most fluoro.

The people who have ordered new training tops, please collect your order from Jane as soon as possible. Payment of $20 is required at the time of collection.
This weeks run is at Lake Canobolas for those not heading to Sydney for the Blackmores Running Festival. Good luck to all runners and remember to stay hydrated. 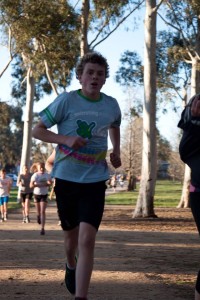 Ethan Crisp was the overall winner on Wednesday night on the back of a 37-second personal best.