Life in the fast lane at Bathurst and Dubbo

On Sunday members were split between the Bathurst Edgell Jog and the Dubbo Stampede. At the Edgell Jog

At Dubbo there was a large contingent of Orange runners converge on the zoo with some outstanding results.

David Ross Led the charge in the Rhino Ramble Marathon with an outstanding run of 3h 15m 5s which saw him finish tenth overall and third in his age category. Gareth Thomas (3:57:34) also had a strong run to secure third place in his category. Nicholas Thomas (4:09) and Stephen Blackwood (4:23) also completed the marathon with good personal performances.

In the Zebra Zoom half marathon, Ursula Wilson (1h34m36s) was the standout performer as she secured third female finisher and first spot in her age category. Mike Cooper (1:35:14) did his usual working his way from last place at the start to third spot in his age category. Triathlete Jessica Richards (1:36:36) rode her bike to Dubbo on the Saturday (with Kim Dale) and then smashed out a super run to be sixth female finisher and third in her age category. Other members to complete the half were: Peter Mueller (1:37:16), Daryl Roweth (1:41:51), James Harvey (1:43:02), Kim Dale (1:44:51) and Wayne Sunderland (2:05:11).

On Wednesday night 114 runners were out on the track on our best night weather wise for more than a month. Jack Daintith keeps setting the pace with a (10:25), while Leanne Corcoran (11:55) was quickest of the girls. Tim Scrimshaw was the overall winner with a strong (12:03). Many Personal Bests were set with: Brian Penrose 11s, Oliver McLean 6m21s, Caitlyn Broadfoot 2s, Kim Broadfoot 15s, Ella Lamrock 10s, Alicia Ross 16s, Hugh Daintith 17s, Lea Dally 5s, Katrina Smith 5m25s and Michelle Lang 14s all beating their previous best times.

For people who have ordered new training tops they will be available on Sunday at Sir Jack Brabham Park. To collect your tops please see Jane and bring your $20.00 payment. Anyone wanting to order a tee shirt, polo, hoodie, etc please call into The Orange Clothing Pool and place your order. They have our logo so are able to screen print onto any type of clothing item you select. Jane has a few extra training tops available so if you didn’t order one you may be lucky enough to get one of these – $20.00. Payment must be made at time of collection.
Secondly, on Sunday 27 September we are having a free bbq after the run at Elephant Park. We have decided to assist Ella Lamrock with her fundraising by having a “fluoro” day. We are asking members to wear some bright gear that day and give a donation to Ella. As you are aware Ella is raising money for the Cancer Council and will be cutting her hair off in a few weeks time. Please join in the spirit of the occasion and pull out the brightest running gear you have. A couple of prizes will be awarded to the most colourful persons.

This Sunday the run is at Jack Brabham Oval and with the expected nice spring day it should be well attended. 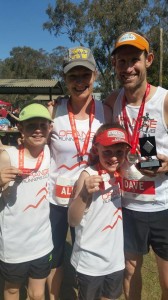