Last Sunday at big contingent from Orange Runners Club headed to Moss Vale to take part in the Southern Highlands Challenge (Trail Run). The rainfall the week prior was a little concerning, however the weekend was perfect conditions and the trails not too bad considering, streams were flowing steadily however.

Last but certainly not least the following kids took part in the 1km fun run Emily and Tegan Sammut, Ellie Mackin and Rosie Corcoran.  A big thank you to Renai McArdle, for her great report and photographs.

At the Sunday Club run around 70 runners had a jog / walk around the Botanic Gardens track with some going that little bit faster than the rest of us. Connor Whiteley (6:18) was one to go a little faster as he led home the one lap brigade, but hot on his heals were Ricky Bangert (6:37) and Joel Broadfoot (6:59), with Joel picking up the overall win for the day. Mary Munro (8:57) was the first girl home just ahead of Tanya Connolly (9:03), with Angela Broadfoot (15:20) coming home in third spot.

Eleven runners tackled the longest distance of five laps or 8kms with Peter Mueller (34:41) the quickest, followed by Daryl Roweth (36:25) and the consistent improver Stephen Blackwood (37:03) coming in third. Michelle Srzich (42:47) withstood the challenge from Grace Srzich (44:45) in the battle of the girls.

On Wednesday night around 95 members took advantage of the first reasonably dry Wednesday in a long while, to get back into the running frame of mind. A good pace was being set, with Jack Daintith being the overall fastest with a strong time of 10:24. Being second fastest and setting a Personal Best of (11:23.3) saw Winston West score the overall victory on the night. Other Personal Bests were ran by Brian Penrose 35s, Thomas Pell 33s, Tim Robinson 1m7s, Bailey Penrose 35s, Fred Bangert 10s,  Alicia Ross 7s, Karyn Vardanega 5s, Hugh Daintith 6s, Elizabeth Dening 01s and Winston West 14s. Fastest of the ladies was Estelle Dean with a (12:25.6) as she continues her preparation for the Adelaide World Duathlon Championships.

This Sunday there is no organized club run as many members will be competing at the Bathurst Edgell Jog or the Dubbo Stampede. Good luck to all members running these events. Just to remind all, that Wednesday nights have returned to a 5pm handicap start. 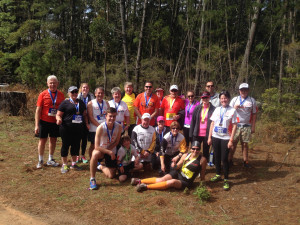