Last Sunday saw a contingent of runner’s club members traveling to Mudgee for the local Running Festival. Overnight thunderstorms threatened to dampen the event, but most runners got to enjoy their event and a little bit of moisture was not going to affect their day.  With the Marathon and Half Marathon kicking off the day we were represented by four runners in the Marathon and eight runners in the Half. Jessica Richards was a standout over the 42.2km distance, as she powered to second female home and thirteenth place overall finishing in a time of 3:33.44. Our resident marathoners Nicholas Thomas 4:08.41 and his dad, Gareth Thomas 4:08.42 ran their third marathon together, while Donna Read ran 4:24.57.

The 10km race appeared to be almost predominantly a ladies race with all our representatives in this years’ event female. Meg Reeves led the charge finishing as fourth female and second in her age category in a time of (41:36). Ursula Wilson ran second in her age category with a solid (45:11).  Winning her age group, Kinisha Roweth ran a consistent (47:42) for the 10kms. Also completing the 10km distance were: Naomi Sunderland (57:12) and Susie Patey (67:19).

Brett Sammut (22:59) was not far away in finishing third in his age category.

At the Sunday club run at The Pinnacle, Iain McLean led out the 10km runners and also picked up the overall win on the day with a sizzling (43:52) for the tough course. Mitchell (Hills) Essex (46:30) picked up second place ahead of Mike Cooper (52:37). The four ladies who tackled the long run had a great battle with Karyn Vardanega (57:19) the quickest ahead of Amanda Gregor (62:37) while Kim Jarvis and Alison Spurway (64:36) tied for third spot.

On Wednesday we unfortunately had the weather gods messing with us again with the drizzle getting heavier as we started our run with 34 brave starters plus our faithful officials turning out for the night. Jack Daintith was again the fastest runner running (10:49) while Liz Simpson was the quickest lady (11:48) following on from her impressive Mudgee effort. William Homer was declared the overall winner with the third fastest time (12:07). Personal Bests were set by Lawson Hamling 6seconds and William Homer 5seconds

Please note that the first Sunday in September (6th Fathers Day), there will be no run for the club – the options are Bathurst Edgell jog or Dubbo Stampede.
Also our Wednesday runs will now revert back to a 5.00 p.m. start each Wednesday.

One of our club members, Maddie Macpherson, is raising money for MND. She has been running back to back races this month with those being Wagga half, Mudgee half  and  this weekend she is off to the Sunshine  Coast for the marathon up there.  She has had great support and encouragement from Brett Sammut.  If interested people can refer to the ORC  Facebook page where they will find an article on Maddie  and if they like,  they can also donate to her cause via a link on the FB page.
Daryl Roweth received a certificate on Wednesday recognizing his 400 club runs, while Denise Quinlan received a certificate for 300 runs on Sunday which she was very happy about.
The club run this Sunday is at Botanic Gardens starting at 9am. New members are welcome but you need to get there 15 – 20 minutes early to register. 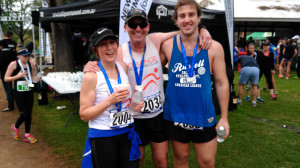