Essex powers to a win over longest distance

With the weather looking a little like spring 93 runners took up the challenge of the country lane at Clergate.  This run was much more relaxed for many as the week before they had combated the thousands at C2S.

Hitting the long and enduring 10km were twenty three enthusiasts.  Mitch Essex rounded up the men in 43:33 and the ever improving Nicholas Thomas crossing the line in 47:07 followed by Damien Harbrow 48:05.  Iron women Jess Richards powered home in 45:08, Amber Rich 46:01 took second honours and Caitlyn Broadfoot finished a credible third in 48:05.

The 5km was hotly contested by the biggest field of the day with forty six runners.  Jack Daintith finished first for the males with 19:34 followed by the Ostini men with a fight of the day between father and son, Frank crossed in 19:55 and Kyle 20:50.    Getting back to top form is Ursula Wilson who was able to notch up 22:39 just in time for Mudgee.  The consistent Liz Simpson clocked 23:37 for second and youngster Lily Craig 26:04 proudly managed third.

For the fast feet troop   Joshua Gray crossed first for the males in the 3km 13:44, Sunday’s winner Bailey Penrose was in PB form finishing with 15:18 in second and his Dad Craig Penrose tagging just behind with 15:38.  Nicole Williamson 12:57 craved up the females, the Denise Rich finished with 17:48 a great effort given that she has not long returned to runners and Sharon Fahy with a time of 19:14 took out third place.

Some notable runners to watch are Lizzie Dening, Dan Benton, Alex Vardanega and Alison Spurway who were all seen kicking up dust on the track a little more regularly.

Brett Sammut raced the Wagga Marathon in last Sunday and completed the long and enduring event in 4hrs 37mins.  Heading north was the Corcoran Family with Leanne having a wonderful run in the half marathon  a time of  1:31:50  –  2nd Female Home & 1st in 40-49 age group,  Jamie completed the 10kms –  57:28 and  Hughie  the 5kms in good speed crossing in 24:14, well done team Corcoran and Brett.

With the birds singing and the trees starting to blossom it is a reminder that with Spring just around the corner, Wednesday’s start time will change.  From September 2nd Wednesday’s run we will commence promptly at 5.00pm – put it in your calendars.

Ninety eight runners burned some rubber with Mitch Williamson flying around in 8:55, followed by Thomas Hogben 11:42.   Looking in great form for her race on Sunday is Ursula Wilson crossed the line in 12:11, coming in second was Caitlyn Broadfoot with 12:36.   Getting back to his best is Noah Lamrock with an 11:54 run.  Alicia Ross was also running very consistently with an 13:33 run.   Personal best’s for this week were Meg Vickery 7sec, Thomas Hogben 13sec, Owen Hogben 38sec, Karyn Vardanega 5sec, Chloe Ziegler 1:14 and Camil Roux 44sec.  Paul Owens was named handicap winner of the day.

A special mention to Katrina Smith who has now official joined the ORC and will be participating in her first half tomorrow in Mudgee.  A large contingent of our runners will be competing in the Mudgee Running Festival tomorrow.  Good luck to you all and remember “when your legs are tired run with your heart”.  We look forward to your results.

This Sunday’s run will be contested at the challenging Pinnacle trail with distances of 3k, 6.4k & 10k on offer to race.

Ladies make sure you have good shoes for shopping- Blackmores is only a few weeks away. 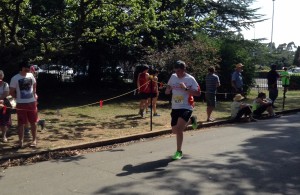 PUSHING ON: Bailey Penrose was last Sunday’s winner at Clergate