Gray in nick of time to break in new timing system

On Sunday the club run was the first with the new timing chips and system. Well done to Michael Sharp and his timing team and the Runners Club team organising the chip exchange and the changeover to the new system. The run itself took place at the Botanic Gardens and although it was a frosty morning, it didn’t take long to warm up.

On a cold Wednesday night at Elephant Park the new timing system was being used and I must say the new mats appear to be much more user friendly. Some great times recorded again with many people punching out personal bests. These included: Joshua Gray 42s, Tim Scrimshaw 11s, William Pell 19s, Darcy Hamling 16s, David Gibson 7s, Kim Broadfoot 1m20s, Xanthe Keegan 34s, Bailey Penrose 12s, Rachel Jones 1m36s and Caitlyn Nobbs 3m47s. The fastest on the night was Brad Simmons (10:55) while the consistent Mark Chapman (11:25) was second to Brad and declared the overall winner on the night. Estelle Dean led the charge of the ladies with a great 11:37 but a real mover is young Xanthe Keegan who ran a PB inspired 11:40 to be second fastest female in a star studded category which has Liz Simpson, Amber Rich, Ursula Wilson and the Williamson sisters all pumping out quick times.

A new timing system training day will be held on Saturday morning 11th July. The starting time is 8.30 am prompt and we expect it will take 2-3 hours to complete the whole thing and Morning tea will be provided.. We will start with how to set the mats up and finish with downloading the results onto the website. The new timing system is “user friendly” and nowhere near as complicated as our old system. The more names we have the better and of course taking a positive role and contributing to your club is a satisfying feeling.

People who have not exchanged their chips (you must be a 2015/2016 financial member), there will be one more opportunity this Saturday at Elephant Park between 2pm and 4pm or otherwise you will need to attend either the Wednesday or Sunday run a few minutes earlier, so we can arrange the exchange and get your name into the computer system. You must produce your old chip to get a new chip. The old chips will not work with the new timing system so if you don’t exchange the chip your results will not be recorded. Any questions or if you wish to volunteer to learn the system please see Jane, Bill, Graham or Michael as soon as possible.

The Gold Coast marathon is on this weekend the only club members attending that I know of are Pam Fullgrabe and our President Jane Fairgrieve. Good luck to both at this great event.

This weekend Sunday club run is at Jack Brabham starting at 9am. 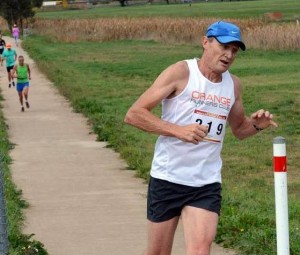 ON THE RUN: Mark Chapman pictured at the Bathurst 10km race earlier in the year, Mark was overall winner on Wednesday night.