On Sunday the club run was held at a icy Jack Brabham sportsground with around 100 runners taking part. With anything from one to four laps on offer Gareth Thomas proved the Doctor knows best when he completed five laps of the 1.75km course in a time of 42:49 for the 8.75km journey.

Tackling one lap, the Gray family again came up trumps with Joshua (7:38) leading home the guys and Caitlin (10:11) first home amongst the girls. Arabella Harvey (10:39) was second girl, while Lucy Dean (12:55) Sidney Harvey and Molly Dean were all within 3 seconds of each other. Seasoned runner Logan Whiteley (7:51) was very close behind Joshua in second place, while James Dean (8:03) strong effort gave him a small victory over son Jack (9:19) as well as overall first place on the day.

The 5.25km three lap race was dominated by strong performances by the 2 front running ladies, with Amber Rich (22:50) finishing 4 seconds faster than Sue Dean. Lilly Craig (26:44) put in another good performance to nudge Karen Neal out of third spot by 1 second. Lilly’s dad David (24:40), continued his return to form being first guy across the finish mats ahead of Alistair Merrifield (25:26) who is also making his way back to form and the ever consistent Jim Rich (27:08) earning the third spot.

Wednesday night saw the Elephant Park track too wet below the first bridge for the 99 starters, with the run reduced for safety to five laps of the smaller loop in the main Elephant Park section. This was a good change up with the five laps slightly longer than the regular run so no Personal Bests were recorded but some great times were set. Meg Reeves showed off her speed recording 11:31 for the five laps to be the fastest ahead of Connor Whiteley with 11:50. Nicholas Thomas (10:40) and Carol Moss (24:08) were the best male and female over four laps. Being the quickest over three laps were Nick Gray (7:50) and Amy Robinson (10:14) respectively. Shining over two laps were Oscar Chandler-Sullivan (7:33) and Lisa Miller11:35, while the Broadfoot’s, Jacob (3:54) and Angela (3:55) who were the top performers over one lap.

This weekend Sunday club run is at CSU starting at 9am, while a number of our members will head to Wellington for the Mount Arthur Challenge. 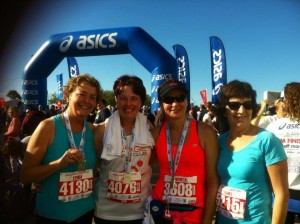