Wellington is a little warmer

On Sunday the club run was to be held at CSU but the biggest snowfall in town in many years put an end to that with the run being called off and many people sleeping in and or tackling the art of building a snowman.  Some super keen runners found an open road out of town, to Wellington and the Mount Arthur Challenge.

Runners members Kinisha Roweth, Craig Carmody and Judy Tarleton swapped there runners for wheels and added to the wind chill factor as they tackled the 50km Cycle, with Kinisha winning the Open Female title, Craig finished sixth in a super time of 1hour 30minutes  and Judy completing the tough course and conditions in 2hours 15minutes.

In the 9km Wedgetail Challenge, our own Meg Reeves (44:20) was first lady home and crowned Queen of the mountain. Jared Sullivan also had a great run to be first home in the Open male category and second fastest overall, in a blistering 42:04. Brad Simmons also picked up the win in the Male Veterans category with a great time of 46:13.

In the 5km Wallaby Run, there were great results for our members, in particular our younger brigade with Lachlan Ross (25:40) winning the Under 12 male category and finishing in sixth place overall. Charlotte Simmons (24:56) also had a great run to finish fourth overall and second in the Junior Female category. Hugh Daintith (28:16) was also second home in the Junior Male category and little brother Cameron Ross (35:55) was fourth home in the Under 12’s behind Lachlan. Mum, Alicia (35:56) continued her impressive return from injury capping off a good day for the Ross household. Also making a welcome return to running after injury was Sue Betts who completed the tough 5km in 41:04.

Also on Sunday in the Sydney Harbour 10k, Iain McLean had the afterburners on with a scintillating 37:30 which was a Personal Best for someone who has shown there versatility by also completing marathons and trail marathons in very impressive times, in the last 8 – 9 months.

This weekend the Sunday club run is at Bargwanna Road starting at 9am. 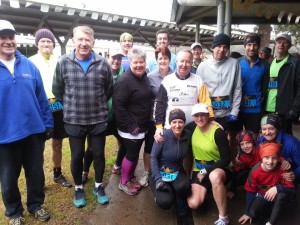 ON THE RUN: A group of the brave Orange Runners who tackled the Mount Arthur Challenge at Wellington last Saturday