Not half-hearted in Bathurst

On Sunday many Runners Club members converged on the Bathurst Half Marathon and 10km races to challenge themselves against their own personal goals on the flat course near the Macquarie River. Our best result was in the 10km where around 25 club members competed and Meg Reeves was our fastest runner and first female home in the super time of 40:32. Mark ‘Deek’ Chapman was next fastest and first in his age category running 41:44. Also winning her age category and second female home overall was Estelle Dean (42:50). Kinisha Roweth (48:38) was first in the slightly different 15 – 24 age group. Others to pick up placing’s in their age groups were Ursula Wilson (44:38), Alison Spurway (53:32) and Lynda Chapman (64:03) who all came in second. While Liz Simpson (45:06) came in third as she continues her impressive return to running. Others to run the 10km race and perform well were: Jack Daintith, Anthony Daintith, Mark Kiho, Daryl Roweth, Tony Fitzpatrick, Paris Meates, Graham Fahy, Pam Fullgrabe, Hugh Daintith, Renai McArdle, Atieh Sadr, Andrew McArdle, Kate Hogben, Sabrina Manickam, Victoria Morgan, Sharon Fahy and Susie Patey. In the Half Marathon, Iain McLean was our fastest runner finishing tenth overall in a time of 1h28m53s behind champion Brendan Davies. Tina Kiho was first in her age group running a brilliant 1h41m4s for the 21.1km run as well as John Betts completed his second half marathon in a month, winning his age and running a time of 1h52m32s. Just behind John was Stephen Blackwood 1h54m11s rounding out our runners club members running this event. 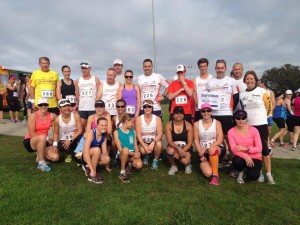 FAST FEET : The Orange Runners Club had a straong contingent at the Bathurst HM and 10km last weekend.

At the club run at Kinross Forrest on Sunday two young stars of the future, Oliver Chandler – Sullivan  (10:33) and Abigail Francis (10:55) were the fastest over the 2km course, with Craig Penrose and Ben Francis the placegetters of the boys and Lauralie Francis and Carol Donlan second and third respectively in the girls. Sally Kitto and the quickly aging Josephine Kitto had a 3km run to themselves finishing in 28:44.

In the very competitive 4.8km run with 22 starters, Anthony Ellison (21:46) led the way from Amber Rich (23:01) while David Craig and Jon Francis were not far behind the leading pair. Alice Hawthorn and Lily Craig were the next quickest of the girls in this difficult course.  Car wash Pete, Peter Mueller led the way over the out and back 9.1km course as he recorded a great time of 42:24, with Sue Dean next best running out a solid time of 44:03. Not far behind was Paul Centofanti and Mr Mike Cooper. Penny Chandler was next best of the ladies in front of Kim Jarvis. Andrew McCauley secured the overall win on the day completing the 9.1km journey in a time of 55:51.

Big congratulations to ORC members Jessica Richards (first in age and fifth female overall), Kim Dale (fifth in age) and Simon Lun who completed the Port Macquarie Ironman on Sunday, with Jessica and Kim qualifying for Kona, Hawaii due to their great results. Also congrats to member and coach Dan Benton who had eight athletes compete and complete this tough event.

Tim Edmonstone and Ricky Bangert were the equal fastest on the day with an 11:27 while Estelle Dean with an 11:41 was the fastest lady runner. The overall winner this week was Karyn Vardenega who ran a very consistent 3 laps for a total time of 14:03.

This weekend the Sunday club run is at Botanic Gardens as part of the Apple Festival with a 9am start.