The Mother of all Sunday Fun Runs

On Sunday many Runners Club members and over 110 starters enjoyed the Orange Apple Festival Fun Run at the Botanic Gardens. Some lovely words and stories from our former President Gary Williams about former Runners Club member and good friend Jordan Cheney, who unfortunately lost his hard fought battle with cancer. Our thoughts are with the Cheney family and friends at this time. Cath Thompson was in attendance from the Apple Festival with lots of apples for everyone and she thanked everybody for attending. Also, it was a big day for all the mothers as well with some beautiful flowers picked up by some of the lovely mothers whose numbers came out in the lucky draw.

In the running, Jamie Corcoran (8:17) showed a nice turn of pace to outlast a strong running Oliver Chandler-Sullivan with Craig Penrose beating son Bailey to third spot in the 1.6 km 1 lap run. Of the ladies, youngsters Madeleine Srzich (10:20) and Mila Srzich (10:30) were at the front end with Glenys Rosser not far away in third. Ricky Bangert (13:05) led the way in the 3.2km race, with Brett Sammut and Tony Fitzpatrick separated by a couple of seconds in the battle for the minor placings. Amber Rich (13:45) and Lyn Stannus (14:01) had a close battle for supremacy in the ladies, with Ella Lamrock not that far away in third spot. In the 4.8km race Connor Whiteley (18:59) sprinted clear of Brad Simmons and David Roux. Jennifer McLean (19:46) was second fastest overall and finished first of the ladies ahead of Lisa Johns and Jessie Dean. Tursten Willms ran 31:50 for the 6.4km run to be the fastest runner ahead of Karyn Vardanega, Alex Vardanega and Amanda Gregor who were all not too far behind.

Setting a fast pace over the 5 lap 8km distance was Iain McLean as he sped around in 31:47. Hot on Iain’s heels, was the superquick Meg Reeves who was next finished in 32:21. Estelle Dean and Ursula Wilson were next best of the ladies, while Anthony Daintith and Peter Mueller filled second and third respectively in the mens.

On a cold Wednesday night a pack start saw the pace on, I think in a bid to keep warm as much as anything else, with around 90 super keen starters. Jack Daintith was the fastest on the night with a personal best inspired time of 10:11. Meg Reeves was quickest of the ladies with a fast 10:51. Karyn Vardanega continued on her good recent form with a very consistent 3 laps producing an overall time of 14:10 and securing Karyn the win on the night. The following people all recorded Personal Best times which is a great result: Jack Daintith 3s, Monique Connolly 1s, Hugh Daintith 7s, Kate Hogben 27s, Lachlan Ross 8s, Rikky Bangert 4s, Man Ha Mackay 9s, Sophie Burton 11s, Chris Brown 1m14s, Jeremiah Murphy 27s and Alyssa Maidment 8s.

Interestingly we have a number of people who have qualified, in their age group, for the Australian Mountain Running Championship after competing in the Volcanic Challenge this year. Those members who qualified are: Basil Baldwin, Brian Sharp, Brian Rix, Mark Chapman, Daryl Roweth, Jared Sullivan, Brad Simmons, Leanne Corcoran, Ursula Wilson, Meg Reeves, Jack Daintith, Bailey Harvey and Kinisha Roweth.

This week there is the Parkes Fun Run on Sunday morning, with 2, 5 & 10km distance races on the day and from what I here, a sizeable contingent of members going over to compete. For those staying at home, the club run is on at Clergate School at 9am. 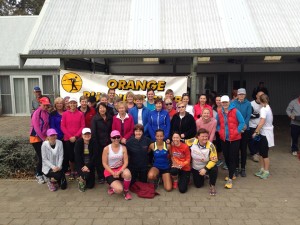