Simmons steps out in South Africa

Last weekend in South Africa our own Brad Simmons tackled the 90km Comrades run, on its uphill year and after looking like breaking the 9 hour mark for much of the run the effort took its toll but he still ran a superb time of 9 hours 24 minutes. Joining Brad at Comrades was our friend from Dubbo, Ian (Fischer) Crafter. Unfortunately, Ian’s run ended at around the 69km mark, after running for about the same time as Brad but missing the cut off time at that point. What an inspiring achievement by both of these athletes.

On the local seen the club ventured out to Berrilee Forest on Sunday and despite the cold and wet start to the day over 50 competitors took part in the runs with  4km and 8.1km distance the choices of the day. Amber Rich again powered to the front in the 4km journey stopping the clock in a time of 17:30, which also saw her declared overall winner on handicap. Youngsters Xanthe Keegan (19:19) and Lily Craig (20:41) were second and third of the girls to finish. David Craig (18:07) was first guy home and not too far behind Amber, while Anthony Daintith (19:11) and Alistair Merrifield (20:24) wrapped up the placings for the lads. In the challenging 8.1km course, Iain McLean showed a clean pair of heels to the field, with an impressive 33:05. Jack Daintith was next best with a time of 34:53 while Mitch Essex (36:01) did a Mike Cooper type run, with a late start and then a charge through the field.  Of the ladies ‘ROY” Leanne Corcoran (36:35) led the charge to the finish, with Ursula Wilson (39:09) and Alison Spurway (46:30) next to finish.

On Wednesday night at Elephant Park the Presidents husband, Bill Fairgreive, clocked up the 1000 club run milestone and was duly acknowledged on this achievement. With around 90 runners enjoying the cool conditions for run around the park, Man Ha Mackay was the overall winner after completing the 3 laps in a personal best inspired and very respectable 16:22. Speaking of pace, it was well and truly on with 3 runners under 11 minutes, including Jack Daintith 10:31, Meg Reeves 10:37 and Steve Martin 10:56.

Don’t forget, Wednesday nights at EP will start from 4.45pm during the winter months, with a mass start.

This Sunday the run is also at Elephant Park and there will be a BBQ after the run. 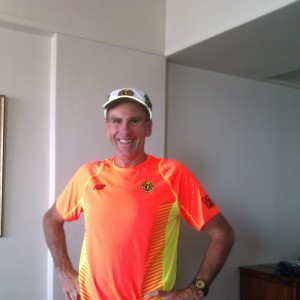