The Sunday run last week was at Elephant Park with a choice of anything from one to five laps of the loop that passes down near the pool. With over 100 runners recorded, it was a slightly congested first half lap, but everyone seemed to enjoy the beautiful winters morning. The one lap 1.6km run was dominated by the younger brigade with Harry Buckland speeding around in 6:43 to finish just in front of the first girl in Molly Dean (6:56). Bailey Penrose (8:13) snared second male finisher just 3 seconds ahead of Logan Whiteley. The extended Dean family where out in force this week with Abby Dean (7:54) and Lucy Dean (8:24) claiming second and third place respectively, while Jack Dean (8:32) wasn’t far away and was declared the overall winner on the day.

Two young talented runners Jessie Dean (13:36) and Ella Lamrock (14:25) were first and second fastest finishers in the 3.2km race. Kerrie Lindsay (16:30) was the third lady home. Some young veterans were the first to cross the line for the guys with Alistair Merrifield (15:03) ahead of Jackson Boucher (15:11) and Aidan Whiteley (15:26) with not much distance between them all.

Iain McLean (18:35) continues to show great pace to comfortably lead out the 4.8km run as he lead home Paul Centofanti (21:20) and James Harvey (22:03). The ladies had the tightest finish with Liz Simpson (20:19) only one second quicker than Amber Rich, while Emma Petraglia (25:26) was third. Special mention to Mitchell (Baxter) Essex who recorded a time of 33:24 for the 4.8km run but I believe completed the 8km run.

Over the four lap, 6.4km distance, Jack Daintith was the quickest in 25:11. Estelle Dean (27:43) was next to finish and fastest lady, some 8 seconds faster than Leanne Corcoran. Two runners working their way back from injury and looking strong finishing in the placings were Matt Dean (28:23) and David Craig (29:20) while Julie Chapman (37:00) was the third lady. Another runner who may have been listed doing the shorter distance than they actually did was David Ross, down as 33:38, but we suspect that he had completed the 8km. Peter Mueller was the fastest over 8km as he recorded (34:03) while Mark Chapman (35:49) and Daryl Roweth (36:05). Sue Dean (34:24) powered into second overall and first lady, just finishing ahead of Ursula Wilson (35:40) with Kinisha Roweth (38:29) finishing with Jessica Richards (38:32) in the battle for third spot.

Also on the weekend John West attended the Australian Walks Championships at icy cold Canberra where he finished as the second male home in the 8km walk in a time of 61 minutes after doing an extra loop. Well done John.

On Wednesday night at Elephant Park, Brad Simmons returned, after his journey to South Africa to do a little 90km ultra race called comrades. The long run and travel didn’t seem to affect his pace as he ran a strong 3 laps in just over 12 minutes.

Fastest runners on the night were Jack Daintith (10:19) and Meg Reeves (10:49) who are consistently at the top of the list. Lucas Vickery was declared the overall winner after running a huge personal best of 18:08 which was 2 minutes 49 seconds faster than his previous best run. Other PB’s were recorded by: Renai McArdle 7s, Norma Bradley 20s, Tom Vickery 7s, Meg Vickery 2s, Tim Scrimshaw 3s, Hayden Scrimshaw 4m28s, Wendy Dibble 6s, and John Keegan 2m9s.

Many of our young running stars are or have competed in the various school cross country events, with a sizeable contingent at the State Catholic Schools Cross Country Champs held at Eastern Creek on Thursday and Friday. We wish all good luck  and congratulate them on their outstanding acheivements to make this level of competition. To parents / Teachers involved, if you can pass on the results of our Club members, we can include it in this report in the coming weeks.

This Sunday the run is at Lake Canobolas. 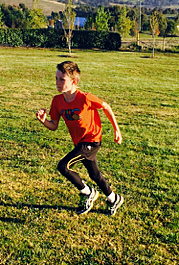