The divine powers possessed by Orange Runners Club stalwart Gary Williams have been highlighted previously and it appears these powers have not lessened over time.

And so it was that the feat of Gary riding to the runners club meet on Sunday saw the gods look down on the club, the week long rain cease and the skies clear for the club run at Bulgas Road under brilliant sunshine.

Unfortunately Gary’s divine intervention did not extend to the parting of the causeway halfway along the course, and thus runners were forced to do laps up and down the steep incline that is Bulgas Road in order to make the normal distances.

One runner who should have been feeling the effects of the hilly run was Graham Fahey. Ensuring he carbo-loaded the night before, Graham proceeded to complete not 1 but 3 laps of the steep incline.

Graham’s mate Martin Ryan, also on a carbo-loading mission, made the most of the slow jog down the hill to make friends with the 2 big black hounds that patrol the neighbouring property. Good on you Red Dog.

The winner on Sunday was Bec Halls, one of our quiet achievers. Bec completed the 4.8 km course and is demonstrating real improvement and a commitment to her running which has led to faster times each week. Well done Bec and keep up the good work.

While the ORC members were running up and down a hill, Brett Sammut was competing in the Central Coast Half Marathon. A slimlined Brett achieved a half marathon PB, completing the course in a scorching PB time of 1.48. Brett has been training hard and it looks like it has definitely paid dividends. Congratulations Brett.

The sun came out just in time for Wednesday’s run. The winner was Joel Kitto who appears to be getting back in form and is doing well to be running after his accident earlier in the year. Well done Joel and watch out for the handicapper.

PBs were recorded on Wednesday by my mate the ever improving little Hugh Danith and Sunday’s winner Bec Halls, both getting their 3km times under 17.40. Very impressive.

It is fitting that the improvement made by Bec Halls has been demonstrated this week as tomorrow’s run is the Daniel Middleton Trek to the Top Memorial Run. Daniel Middleton was Bec’s younger brother who died in tragic circumstances in 2002. The Trek to the Top is held in memory of Daniel, who was school captain of James Sheehan, a CYMS footballer and much loved son, brother and mate. This event starts from opposite the Mountain Tea House at 8am for an 8.30 start and is $5 for entry. We hope to see many ORC members take to the course in support of this run.

This Sunday is also the Orange Junior Triathlon at Lake Canobolas so members are asked to as always, to be mindful of cyclists when on their journey to Mt Canobolas.

The run will be followed by the ORC Christmas Party at the Bloomfield Country Club from 12pm. 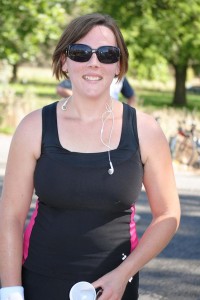 TRIBUTE: Bec Halls will run in honour of her brother in tomorrow's Daniel Middleton Trek to the Top Memorial Run.