Stage was set for tight result in shortest run

On Sunday Runners Club members returned to the new Stagecoach Road run, which is a testing but enjoyable run on a country road. Our great course maestro, Mike Cooper, obliged by also marking out a 2km run to eliminate the little hill for those who would prefer a slightly easier option.

In the 2km run Bill Fairgrieve  (11:59) was the first finished over the shortest run, but hot on his heels were three youngsters led by Oliver Chandler-Sullivan (2 seconds behind Bill) and included Harry Dean and Oscar Chandler-Sullivan not too far behind them. Leading the ladies home on the shorter run was Carol Donlan (13:37) who finished ahead of Angela Roach and Denise Quinlan.

In the 3.5km run, which includes that nice hill, Tanya Connolly (17:41) was kept honest by young Abby Dean while Melissa Fogarty kept up her impressive return to the club finishing in third spot. Relatively new member Daniel McCauley (20:29) was best of the guys with another newish member Matthew McGreal also doing well to complete this solid run.

In the 5km 28 starters tackled this testing run with Jack Daintith impressively completing the run in 20:55 to be a clear winner. Daryl Roweth was second male finished just in front of Alex Irwin. Promising junior Jessie Dean (24:20) was second overall and first girl home finishing just ahead of Kinisha Roweth and Kate Thornton.

In the toughest and longest run of the day, the 8.5km, Iain McLean set the standard with a strong 35:48 seeing him finish just in front running mate Mitch Essex, while Mark Chapman was third male home. Meg Reeves (36:52) again showed her pace to finish with a 1 second slower time than Mitch. Estelle Dean and Penny Chandler were the ladies placegetters with great performances amongst the 31 runners who tackled and conquered this run. Chris Brown also ran the long run and ran 54:59 to secure the overall handicap win.

What a week of weather, Wednesday’s run was very wet underfoot with some debris adorning the track.  In the mist of it all a number of the runners managed PB’s Jack Daintith shaved 7 sec off his time, Alison Spurway 39 sec, Thomas Hogben 8 sec, Ati Sadr was impressed with her 24 sec PB, Tim Edmonstone 13 sec, Liam Maidment a huge 4 mins 39 sec, Wendy Dibble 9 sec, Angela Roach 52 sec and  well done to Jeremiah Murphy on his 1 min 53sec PB and being named Wednesday’s winner.

With the mud compacted to his shoes Nathan Sutherland muscled out a 9:56 to complete his 3kms.  Estelle Dean was the quickest of the females finishing with 11:28.   It has also been noticed that the quiet and ever improving Tanya Connolly is now consistently finishing with times around 15:38, well done Tanya.   Gareth Thomas managed his three laps in an average speed of 4:32 per lap a time desired by many.

Next Sunday 3rd May is the Bathurst Half and 10km.  Many of the ORC member will be participating, it is a flat course and close to home so if you have not entered it is not too late to do so.

ORC membership is due and payable before the end of April it is only $70 per family or individually $15 for school ages children and $30 adults.  If you have any questions please see Jane or Bill.

This weekend the Sunday club run is at Gosling Creek and is the new track with a 9am start. 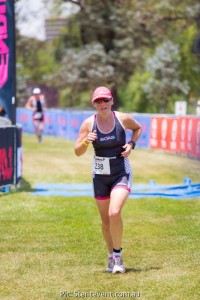 SHE’S BACK: Melissa Fogarty is returning to running after nearly a year lay off from injury