A number of club members ventured to Canberra to compete in the Australian Running Festival last weekend. The weather was fine and our Club members were even better. Saturday got underway with the 10km run with Leon Lincoln (48:55) leading the way for Orange, with Joshua Dunn (55:03), Atieh Sadr (57:58) and Susie Patey (63:12) all running great times. In the 5km race, Nathan Sutherland led the charge (18:10) finishing eighth overall and third in his age category. Jack Daintith ran a strong 19:24 to finish fourth in his age group, while Liz Simpson (21:08) was impressive running third in her age group. The Williamson sisters, Nicole (21:53) and Carrie (22:47) were fourth and fifth respectively in their age category. Also doing the 5km was the improving Hugh Daintith (27:25) who finished strongly.

On Sunday in the marathon Ursula Wilson put in an outstanding run as she powered to a 3 hour 24 minutes and 35 seconds finishing time and thirteenth overall female home, on a testing course. Daryl Roweth finished in a time of 3h47m54s, while father and son Gareth and Nicholas Thomas ran together for a 4h15m result in Nicholas’s first ever marathon. Also battling away at the 42.2km event was Stephen Blackwood who finished in 6h34m.

In the half marathon our younger runners and some not so young shone through their efforts with Jack Daintith finishing first in the 13 – 15 age group running 1h39m35s and Kinisha Roweth first in her 16 – 19 age group in her first half marathon in a time of 1h46m51s. Not to be outdone by the younger set, John Betts did his first half marathon in some 30 years and ran a fantastic time of 1h56m51s. Also running and doing great times were Peter Mueller (1h42m18s), Anthony Daintith (1h45m58s), Donna Read (1h52m44s) and Rebecca Lincoln (2h25m5s).

Jack Daintith was unaffected by the weekends efforts as he set the fastest time of the night with a strong and consistent 10:31. Fastest female and finishing not too far behind Jack and Iain McLean (10:45) was Meg Reeves with an 11:06. Overall winner this week was Alison Spurway who had a PB inspired and very even 14:45.

A very big thank you to the following people who have stood down from their positions but have contributed a great deal to ORC or the OCCRF:-

This weekend the Sunday club run is at the relatively new run venue, Stagecoach Road with a 9am start. 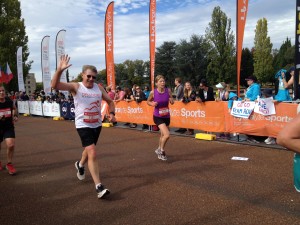