On Easter Sunday a large number of people enjoyed a little run on a cool morning and were rewarded with a nice Chocolate surprise from Bunny Fairgreive. Fastest runners over 3km for the girls were the consistent Amber Rich (13:09) and promising juniors Lily Craig (15:04) and Abby Dean (15:56). Of the guys, Iain McLean (12:08) lead the way from Nicholas Thomas (13:47) and Michael Sharp (15:23). In the 2 lap 6km run, Estelle Dean (25:05) outpaced a very promising young athlete, and daughter Jessie Dean (26:42) with our backpacking friend Naomi Boynton (26:47) again not far away. Leading the way for the men were experienced runners Brad Simmons (23:26), Mark Chapman (24:36) and Mitch Essex (25:43). Estelle Dean was rewarded for her efforts as she was declared the overall winner for the day.

A new running tactic handed to us from an anonymous club member for the not so serious runners …  Wait until Kim and Allison catch you up at the race half way mark then strike up a conversation. Once they have completely absorbed themselves in chat, gradually pull away and establish a 50 m lead. Chat continues….  Every runner looks for motivation. The motivation in this case is to complete the course at least 50 m ahead of the chatting in the fear of being caught up and exhausted in conversation. They were still chatting as they crossed the finish line. Victory to one John Moss. Sorry John.

At the Australian Masters championship held at Bankstown over Easter, two of our senior members (John West 60 – 64 and Brian Rix 70 – 74) competed in running, walking and throwing events in their respective age groups. John West finished third in the 10km road walk in 70:17 and finished fourth in both the 1500m and 5000m track walks and all times were personal bests for John. Brian Rix finished fifth in the 800m and 5000m, while he finished second in the 10000m with a PB (50:06), as well as securing third place in both the 1500m and the 2000m steeplechase (10:39 another PB). Well done to both of you.

Brad Simmons was the fastest on the night with a strong and consistent 11:24, followed very closely by Estelle Dean with an 11:37 and backing up her great Sunday run Jessie Dean did a fantastic 11:42. Overall winner this week was Ati Sadr who had a PB inspired 16:37.

Also this year’s membership fees are now due, so please fill out a registration form which is available on the website or from one of the committee members and make your small payment to ensure you can run with the club.

This weekend will see a number of our members travel to Canberra to compete in the Australian Running Festival. With events including 5km, 10km, Half Marathon, Marathon and Ultra Marathon and many will have ORC members competing in them. We wish all runners good luck and hopefully we will be able to report their results next week.

This weekend the Sunday club run is at CSU at 9am. 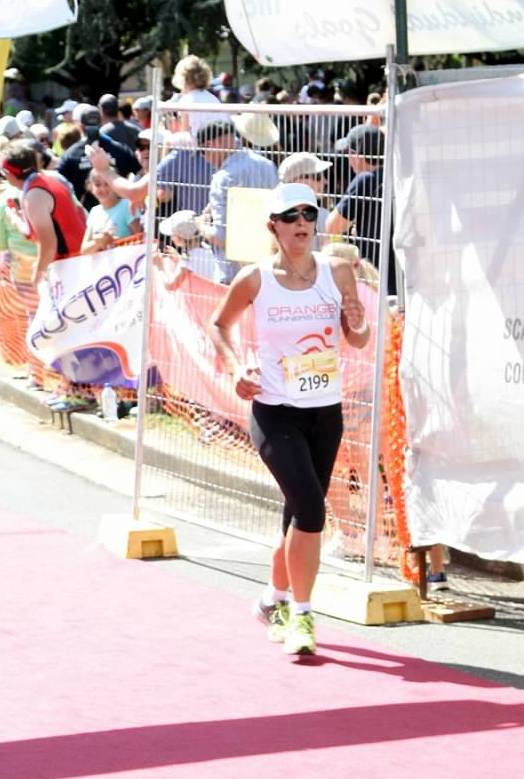 FUN RUN: Ati Sadr, pictured finishing her race at this year’s running festival, was the club’s winner on Wednesday night at Elephant Park.