On a beautiful Sunday morning runners club members enjoyed a walk, or run around the Jack Brabham fields. Of those doing the 1 lap course, Lachlan Harvey was the quickest, completing the lap in a time of 11:08 to also pick up the overall handicap win.  John Hannan was not far away in second place while Nicola McLean (13:59)  was the fastest lady ahead of Denise Quinlan and Kate Kenny. In the 2 lap 3.5km run the consistent Amber Rich was the quickest with a time of 14:36 to lead home Ella Lamrock and Man Ha Mackay. Of the men, Bailey Harvey (17:31) finished with the fastest time by just a few seconds from Noah Lamrock and Gary Taylor coming home in third spot. The ladies again got the upper hand in the 5.25km, with Sue Dean (23:39) leading home the field. Lily Craig and Kay Davis were the second and third placegetters after strong runs. Coming in second spot and first of the men was David Craig (25:39) while Nathan Garton and Brian Penrose continued their good recent form to fill the minor placings. In the 7km distance, Nathan Sutherland ran 25:40 to be in a league of his own and finished clear of the consistent pace of Daryl Roweth and Mike Cooper in second and third place respectively. Kim Jarvis (40:11) lead home the ladies, with Alison Spurway and Pam Fullgrabe not far behind. Stephen Blackwood (44:33) started a little late and made up his own distance by doing 5 laps or 8.75km.

On a warm Wednesday night at Elephant Park 50 odd runners took on the challenge of getting around the 3 laps as quickly as they can to try and break their own Personal Best. Only 3 managed to do that this week with Jennifer McLean getting the best result with a 1minute 8second improvement. Hugh Corcoran got an 8 second PB with a little bit of help from mum Lea-ROY, while Jason Hamling keeps chipping away at his best times with another 3 second improvement. Jack Daintith was the fastest overall again this week with a 10:39 overall time and Alicia Ross was the fastest lady again as well doing a consistent 13:12. Overall handicap winner was Helena White who completed her 3 laps in 18:42.

Now is a great time to start thinking about the Orange Colour City Running Festival. There is an event to suit everyone from 2 K for the kids up to a full Marathon. The first 250 entrants go in the draw to win 1 of 20 pairs of Skins Compression tights. By entering before the end of January you will be taking advantage of a discounted entry fee. Proceeds of the 2015 festival will be donated to The O’Brien Centre, who support local people with a mental illness. Enter online at http://www.orangecolourcityrunningfestival.com.au/

This Sunday the club run is at Lake Canobolas which is always a nice run around the walking track of the lake.

On behalf of the Runners Club committee I would like to wish all members a happy and safe Christmas and New Year and look forward to many runs in the new year. 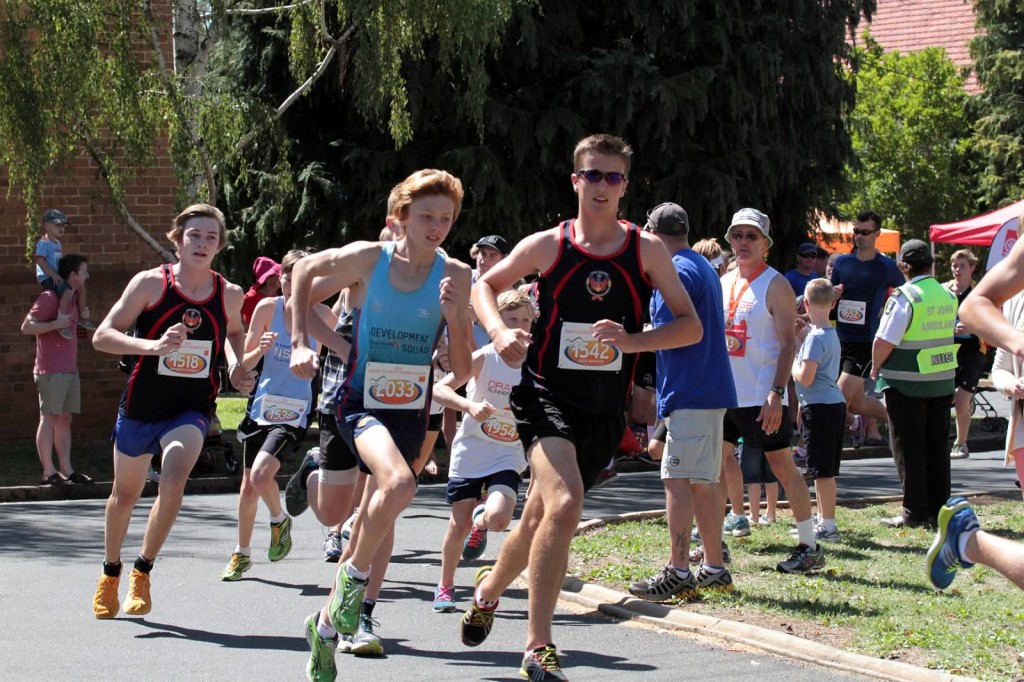 POUNDING THE PAVEMENT: The field gets moving in the Orange Running Festival’s 2014 five kilometre.