lady Amber Rich (22:50) who continued her terrific recent form. Anthony Daintith finished second in the mens race with the consistent Jim Rich home in third. Visiting new member Naomi Boynton ran a great race to finish third overall and second lady behind Amber, while Dani Syme finished a strong third. The 9km run was taken out by Meg Reeves with a fast 40:35 to lead home Jessica Richards and Kinisha Roweth. Of the Guys David Ross (41:35) was second home behind Meg and just seconds in front of Iain McLean, with Jack Daintith in third place. David Ross was the overall winner on the day.

Whilst most Aussies were preparing their BBQ’s for the typical Australia Day festivities, several of our long distance members were running laps at a trail race in the Blue Mountains national park. Iain Mclean, David Ross and Brett Sammut were competing in the Running Wild Knapsack 3hr trail race, where racers run around a 5km trail loop through the national park, as many times within the 3hrs cut off. All boys managed to run 26kms within this time, with Iain taking 2hrs21min, Dave 2hrs39min and Brett taking the full 3hrs. Great training for their assault on the 45km Six Foot trail marathon, in March.

On Wednesday night at Elephant Park we had one of our biggest nights with 133 starters crossing the start line and a record number of Personal Bests were recorded. PB’s were set by David Craig 1s, William Pell 1m6s, Jamie Corcoran 20s, Josephine Kitto 1m29s, Sabrina Manickam 1m37s, Joy Harvey 15s, Michelle Prestwidge 2m16s, Molly Cameron 45s, Hilary Smith 1m12s On Sunday 60 plus members were out on the Kinross Forest track on a beautiful morning following Saturday’s downpour. The tracks had a few wet areas, but generally were great for running. It was a McLean double over the 2km loop with Jennifer (14:15) fastest overall and William (15:08) fastest of the guys. Of the ladies, Carol Donlan was second and Moyia Vidler third. Finishing in the placings behind William were, Lachlan Harvey and John Hannan. Sally Kitto and Josephine Kitto made up their own 3km distance and surprise, surprise, they finished with identical times of 34:40. Nathan Sutherland (18:46) was outstanding over the 4.8km to finish ahead of the first placed, Jason Hamling 45s, Lawson Hamling 22s, Julian May 30s, Jack Cranney 1m34s, Juan Zuniga 1m04s, Tom Vickery 1m19s, Meg Vickery 2m19s, Beckie Plant 25s, Mathew Vickery 4m31s, Terri Henderson 1m58s, Meg Reeves 9s, Donna Reed 40s, William Mclean 49s and Susie Patey 17s.

Fastest on the night was again Jack Daintith, with a time of 10:42, while fastest woman was Meg Reeves with an impressive 10:52 which was second fastest overall. The overall handicap winner was Beckie Plant with her PB inspired 18:30

Don’t forget that Dan Benton will be conducting two free coaching clinics for all ORC members. The drills will consist of improving running skills and learning to run without causing injuries. The dates are 2nd and 9th February at 5.15 p.m at Riawena Oval.

We still need some more people to volunteer to take the mats for Sunday runs. It only takes a few extra minutes before and after the run so please think about putting your hand up to help out for a month. A big thank you to those who have volunteered their time so far.

Also, we need some more names on the list of volunteers for the OCCRF (running festival Feb 28 – March 1). The book is at every run so please put your name down as soon as possible. If you can help out for an hour or two, there will be a job you can do.

Remember, time is running out for the Running Festival Early Bird Entries, which closes today (January 31), so don’t miss out on the discounted entry fee and enter now. Also, there are no entries taken on the Festival Weekend so if you intend to run, you need to enter before midnight on the Friday February 27.

This Sunday the club run is at Pinnacle with 3km, 6.4km and 10km the usual distances. 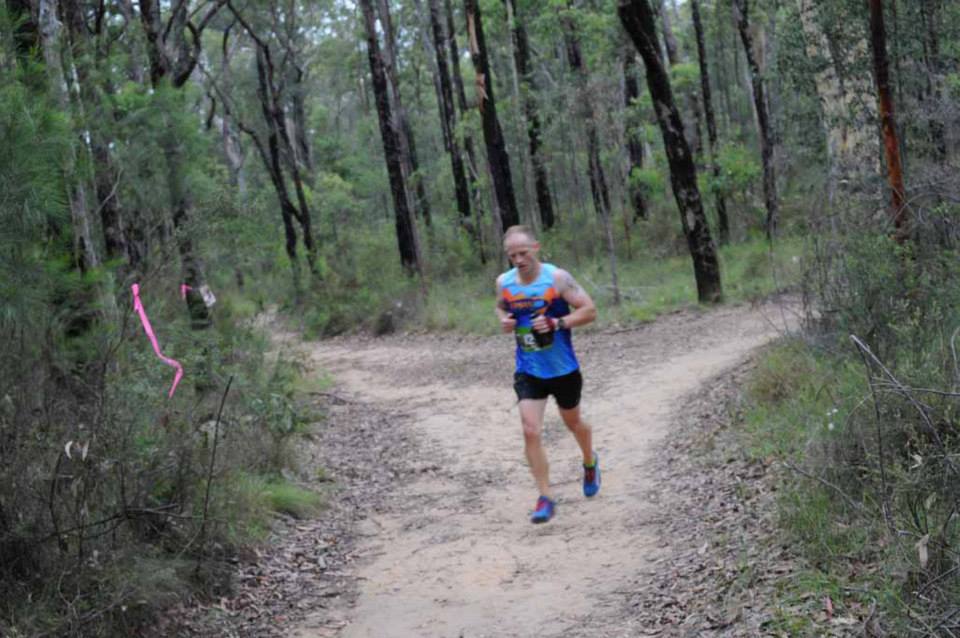 Iain McLean competing in the Knapsack challenge in the Blue Mountains on Australia Day.