Kinross Forrest was the venue for this week’s Sunday run and two brothers fought out the 2km race, up and down the hill, while a mother and daughter combination took out the 2km and 4.8km race respectively.  Young gun Matthew Homer (9:14) had too much pace for older brother Phillip (9:50) in the 2km race to run clear of the Ross brothers, Cameron and Lachlan (14:40). Matthew also picked up the overall win on the day for his efforts. Denise Rich (12:45) led the way for the ladies with Emily Sammut (15:00) finishing second and Denise Quinlan and Carol Donlan (21:22) sharing third.

On a shocking Wednesday, that saw temperatures all day in the minus, with the chill / wind factor and drizzling rain and some snow falling, 32 runners and walkers braved these conditions to complete the Wednesday ritual of running this course. Congratulations to these guys, especially the ones that are out on the track a bit longer than most, as well as our organising and timing crew. Congratulations on your commitment. Lauren Kerwick (11:03) and Charlotte Simmons (11:08) were the fastest while Ricky Bangert (11:49) was the quickest of the guys. Courtesy of her fastest time Lauren was also awarded overall winner on the night.

One exciting result from recent weeks, was our own Brian Sharp who is already qualified for 2015 Duathlon World Championships in Adelaide in October, he has now defended his NSW Duathlon title in Penrith and is now qualified for the 2016 World titles as well, this time to be held in Aviles, Spain.

This weekend will see many local runners venture to Sydney to tackle the famous City to Surf race and we look forward to reporting on these next week.

Locally, the club run is scheduled for the Endeavour Oval version of the Elephant Park run which is always a nice change up from the Wednesday loops. Good luck to all and hopefully the weather is a little kinder to our runners. 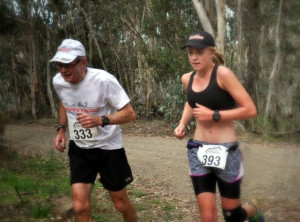