On Sunday at Lake Canobolas 47 runners turned out to tackle the improved track and leading the way over 6km was Paul Centofanti (26:47) as he secured the overall win on the day as well. The consistent Mark Chapmen finished just five seconds behind Paul in second spot, while Anthony Wilson (28:05) has continued his impressive form with the club in just his twelfth run with the club. Of the ladies Naomi Boynton (29:06) set the pace ahead of the light stepping Karen Neal (30:07) and Lily Craig (30:40).

A group in excess of 40 runners from Orange made the trip to Carcoar on Sunday, where every race distance was well represented by the ORC members. With numerous outright victories, high placings and age group champions, all involved have done themselves proud. The stand out performances included, Mitch Essex who ran the outrageously hilly 60km ultra marathon in a superb time of 5hrs 34min for sixth male finisher and eighth place overall. Other notable results included Iain McLean who was fifth overall in the marathon and fourth male with a time of 3hrs12min. Jared Sullivan was fourth overall in the half marathon, with a time of 1hr20min. In the shorter distances, Meg Reeves won the 6km race outright in a time of 26m 15s, beating all the males in the process. Brandon Connolly finished around 50 seconds behind Meg to come in second and first male.

Other Runners Club members results from the day:

On Wednesday 96 members did their laps around Elephant Park with many great results highlighted by the number of Personal Bests set. PB’s were recorded by Dylan Crisp 10s, Mitchell Cooper 8s, Ben Fairfax 52s, Fiona Montgomerie 6s, Thomas Lloyd 3s, Anthony Wilson 11s, Isobel Edmonstone 34s, Amanda Mackay 17s Sladana Cundell 1m15s and Toby Murphy 1m46s. Jack Daintith (10:48) and Ethan Crisp had a mere 2 seconds between them, but the most impressive result was one of our Ultra Marathon runners, Mitch Essex (10:58) who was third fastest, just days after his 60km effort. The overall winner on the day was Chris Cameroni  who completed his three laps in a solid time of  (12:33).

Names are still being taken for the Christmas Party which is on at the Nashdale Hall on 28 November.  Please put your name down and payment as soon as possible.  People who have not paid please give your money to any committee member.  Santa is coming with lollies for the kids, there will be a jumping castle for the little folk and the catering is being undertaken by the talented Sue Betts. Cost is $10 for a family or $5 for a single.  There will be numerous raffles and the first prize will be a voucher for $200, second prize is $150, third prize is $100 and 4th prize is $50, plus numerous smaller prizes.  You have to be there to win a prize.  We will also be announcing the major winners for the various running categories.

This weekend the club run is at Bulgas Road. 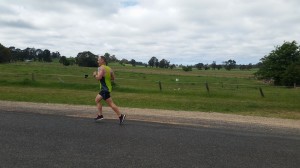