On Sunday our club run was held at the testing Bulgas Road course with 61 starters set to tackle either the 3, 5 or 10km distances. Over the shortest distance Jack Daintith (12:28) led the way to finish just in front of the improving Lachlan Ross (13:03) and a similar distance back to Noah Lamrock (13:32). Of the girls Amber Rich (13:35) was the fastest.  Tanya Connolly (17:22) captured second spot ahead of Norma Bradley (25:48).

To the 10km and Iain McLean (43:08) backed up from last weeks scintillating Carcoar Marathon performance to clear out from the rest of the runners. Mark ‘Deek’ Chapman (48:13) was best of the rest, while Daryl Roweth snuck home in third spot (48:35). Karyn Vardanega (54:07) put in another strong performance to lead home ‘runners club legend’, Kim Jarvis (59:53). Jackson Essex (17:03) was the overall winner after completing a great run in the 3km race, showing some ‘Mitch’ (dad) like determination to  run out the distance.

Our usual course marker ventured to Melbourne for the weekend and ran in the City2Sea 15km race (sister event to the City2Surf) and he ran a super time of 65minutes 46seconds for the 15km finishing at the top end of both his age group and overall.

On Wednesday at Elephant Park around 76 members attended the 3km run with those attending enjoying the warmer conditions although I think it had an impact on many of the times. Jack Daintith showed a clean pair of heels to the field setting the fastest time of (11:03).  The Crisp brothers are starting to dominate the fast end of Wednesday runs, but Ethan will have to keep watch over his shoulder for Dylan, who ran a 50 second Personal Best time of (11:55), which was only eight seconds behind Ethan, but also Dylan clocked the fastest lap of all runners with a quick (3:01). Other PB’s were set by Victoria Morgan 25s, Gary Holway 34s, Anthony Wilson 3s and Harry Cummins 1s. Victoria Morgan also secured the overall win on the night with her overall time of (15:32).

We are collecting old running shoes for Planet Earth. All you have to do is wash any old pair of running shoes you no longer need, tie them together and bring them to Runners Club and put them in the collection bin. In due course David Gibson will take them to the collection point in Canberra. Sounds like a great idea and a way to help people less fortunate than ourselves.

Names are still being taken for the Christmas Party which is on at the Nashdale Hall on 28 November.  Please put your name down and payment as soon as possible.  People who have not paid please give your money to any committee member.  Santa is coming with lollies for the kids, there will be a jumping castle for the little folk and the catering is being undertaken by the talented Sue Betts. Cost is $10 for a family or $5 for a single.  There will be numerous raffles and the first prize will be a voucher for $200, second prize is $150, third prize is $100 and 4th prize is $50, plus numerous smaller prizes.  You have to be there to win a prize.  We will also be announcing the major winners for the various running categories.

Also don’t forget you can now enter in your chosen event at the Colour City Running Festival, so take advantage of the early bird prices and get your entry in.

This weekend the club run is at CSU. 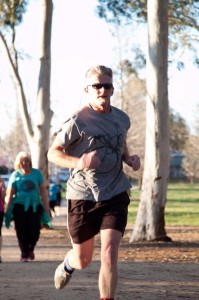